In an interview at Code Conference 2016, Amazon founder and CEO Jeff Bezos talked through a few lofty goals. Literally lofty. Like, orbital. Bezos wants to see heavy industry move into space entirely, and he wants space startups to become as common as internet startups are today.

Of course, Bezos framed all this in an assertion that Blue Origin, his own rocket manufacturing and spaceflight company, will help humanity get there.

But all marketing aside, Bezos made good points. Today's mining and manufacturing processes are largely unsustainable. Even high-end, big-name producers like Apple source some of their materials and labor from developing areas where costs are low because workers are overworked and undercompensated. These areas also tend to have lax worker and environmental safety laws.

And heavy industry requires huge amounts of energy and resources. Take cement and concrete manufacturing, for example: The cement industry's share of energy used in the United States is about 10 times greater than its share of gross national output of goods and services. Cement is also responsible for 5 percent of global carbon dioxide emissions.

As Bezos said, the developed parts of the world became developed because of these practices, which are limiting our own quality of life due to pollution and energy drain, and are limiting developing areas' ability to catch up. Could switching to robot-controlled asteroid mines, moving our manufacturing into orbit and powering both with space's plentiful solar energy save the planet?

The space industry is too young to give us an answer, but it's certainly possible that private space companies like Blue Origin and SpaceX will help make it happen. After all, it's thanks to private industry that the cost of sending stuff to space has dropped from $10,000 per pound to around $1,000 per pound over the past decade.

Check out the video above to learn more about Bezos' sky-high ideas and the down-to-earth realities involved.

Science Says Your Selfies Are Less Attractive Than You Think 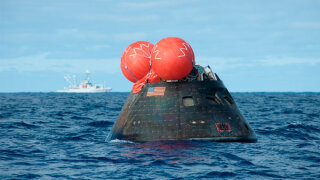