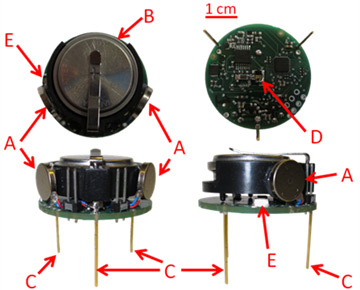 After hosting a supremely fun backyard cookout with friends, you start the less-fun cleanup process. Despite your determination, you'll probably leave a few crumbs behind -- and the remnants of your backyard cookout will likely draw one of nature's finest teams.

It starts with a swarm of hungry ants advancing toward the pile of crushed potato chips on the cement. Piece by piece, the ants collect the crumbs to carry back to the nest. The tiny insects are working together, helping lift morsels several times their size. Acting collectively, they achieve what one individual can't do single-handedly.

What if we could design robots like these ants, able to work both independently and as a larger whole? For the most part, creating small armies of robots has been expensive and time-consuming, leading scientists to stick with computer simulations over the real thing.

Enter Kilobots. Researchers at Harvard University created the little bots in hopes of creating an easy and cheap way to test algorithms -- or programmed steps to solve problems -- across a group of many robots. As of March 2012, the group had created small swarms of Kilobots, with a greater goal of building a "kilobit" of Kilobots: a collective of 1,024 individuals (and where the project gets its name) [source: Rubenstein].

These simple machines may help test and develop complex behaviors in other types of robots. Kilobot supporters say the system could fine-tune robots that find and rescue people from collapsed buildings or possibly aid in cleaning up sticky oil globs from polluted environments.

Think of Kilobots as a test fleet: They won't necessarily possess the qualities -- like wheels -- that other machines will have. Rather, they're the playground where scientists can experiment and sort out any problems with their programming before sinking their research dollars into larger, more complex robots.

Commanding one robot to action may be a cinch, but getting an entire group to operate with the same precision isn't as easy -- or cheap.

One of the biggest draws of Kilobots is their simple design and low price. Michael Rubenstein, who helped develop the robots with other researchers at Harvard University, says keeping costs and assembly time down was a priority.

Each component has a basic use, whether it's moving around or signaling to its mechanical buddies close by. Kilobots are unique in that they stay in "sleep mode" until summoned by the overhead controller. A person can turn an entire swarm of Kilobots "on" by sending out one signal -- as opposed to manually switching "on" every robot.

If a 1.3-inch (33-millimeter) Kilobot is what your heart desires, here's a basic list of what you'll need to bring one to life [sources: Rubenstein et al., K-Team Corp.]:

Done with that DIY? Let's dive into what Kilobots can actually do.

The parts for each Kilobot cost less than $15 -- about 10 times cheaper than the least expensive collective robots as of 2012 [source: Rubenstein et al.]. One robot takes about five minutes to assemble. And for the programming and robotics experts out there, the blueprint for these basic robots is open-source, meaning the steps are available for anyone to use. A company called K-Team Corporation also sells assembled Kilobots. 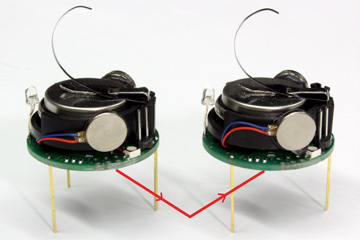 The Kilobot on the left is transmitting a signal by bouncing it off the table to the Kilobot on the right, which receives it.
Image courtesy Michael Rubenstein, Nicholas Hoff and Radhika Nagpal

We said it before. We'll say it again: Kilobots are designed to be the ultimate algorithm testers.

Let's say emergency personnel want to bring robots onto the scene for a search-and-rescue mission. They'd need to know how well the machines could communicate with each other. This is where Kilobots are especially useful as test dummies.

Each robot can bounce an infrared signal off the ground to another bot beside it, allowing it to sense where it is in relation to others in the swarm (see picture). Bouncing that signal can also ensure that one's robotic neighbors are on the same page for when and how a task is supposed to be carried out . Knowing where other robots are is essential when it comes to locating objects in a given environment and bringing them back to the home base.

So far, there are three basic swarm behaviors Kilobots have mastered: foraging, formation control and synchronization.

Foraging is what it sounds like: commanding several robots to disperse and explore the area around them. With Kilobots, the idea is to chip away the time it takes to forage in a particular location. Here's where signaling to others in the swarm comes in handy. Michael Rubenstein, a researcher who helped design the robots, says foraging as a group is far more efficient than individually, especially in urgent situations.

"If there's a collapsed building from an earthquake, and there's a person who's stuck in that building -- if you send a single robot it might take a lot longer to find that person than if you send a large group of robots to find that person," he says. Although a collapsed building and a flat, white board are totally different environments, the algorithms used to navigate both are similar.

Another important part of effective swarms is formation control, the ability to behave in unison or in a specific part of the swarm. By maintaining communication with each other, Kilobots possess a virtual bearing sensor that gives each one a realistic sense of its position in the group. Instead of using hardware to achieve this, Kilobots make do with basic software and more advanced algorithms. Performing complex behaviors with as little hardware as possible encompasses the spirit of Kilobots.

In a system where every robot is expected to be on the same page, synchronization matters. If part of the swarm needs to perform a task for a certain amount of time and then switch to another seconds later, the entire group must have the same internal clock. One way to visualize this is to imagine a swarm of 1,000 Kilobots, with each using its LED light to represent a pixel in a larger video that can be viewed from above. To know which color to signal at any given time, every Kilobot must be using the same clock.

Though they're academia darlings, Kilobots show promise in the real world, too. They're drawing boards of sorts. Say some inspired researcher dreams of building a swarm of insect robots to pollinate crops. He or she would benefit from testing Kilobots first.

The petite bots also can shed light on swarm intelligence, or the collective behavior of a group, and how to better manage large gangs of robots.

Take collective transport, for example. Ants employ the behavior to carry food items (like those potato chip crumbs) back to their nest. Researchers have learned that certain individuals -- ant and robots -- play a special role in the process. Some may create a chainlike pathway that guides foragers back to the nest, while others are in charge of working together to carry the object from one place to the next. In the Kilobot arena, testing the same principle could help school robots on how to detect and clean up messes in a given environment -- like oil spills, for example.

They also might come in handy for making better maps or snapshots of environments. The robots could do this by exploring an area and creating a spatial map for reference. Other assignments could include crop pollination or leading search-and-rescue operations [source: Rutter].

Michael Rubenstein, one of the scientists who created Kilobots, says future research will focus on coming up with new algorithms that make it easier to control the swarm. Programming the robots to perform collective transport activities and finding ways to create useful shapes from the robots (like the collapsed part of a building, for example) remain priorities. Who knows, maybe Kilobots will inspire robots that resemble the science fiction favorites Transformers. The idea is to have smart, smaller robots that can connect to form a larger, more powerful one.

Still, Rubenstein says there's plenty of room for improvement. Constructing a 1,000 robot swarm has taken time. And even though Kilobots can self-correct, they lack precision when traveling at longer distances.

Ants swarm to an object several times their size and pick it up effortlessly (or it seems that way). But there's an entire layer of communication we're missing if we don't look closely. If we want intelligent machines with similar capabilities, we have to take some tips from nature. What surprised me the most when writing about Kilobots wasn't the robots themselves, but the level of detail required to make programs and algorithms work. Kilobots only skim the surface when it comes to the fascinating ideas researchers are testing. These tiny, mechanical armies serve as a reminder of how neat and complex the world is, and how trying to understand it is half the fun.