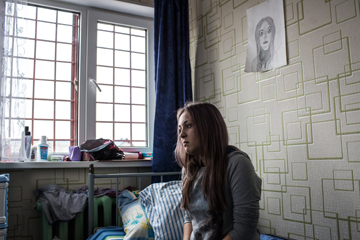 Alya, 17, undergoes treatment for addiction to drugs including heroin, krokodil, and others at City Without Drugs, one of the few drug treatment facilities in Russia.
Brendan Hoffman/Getty Images

There's a good chance that you've seen one of those posters showing before-and-after pictures of methamphetamine addicts, who morph from normal-looking humans into sallow, skeletal wraiths with gray, eroded teeth. But believe it or not, there's a drug that reportedly wreaks even more extreme carnage upon users. How extreme is more extreme? Check this out: It actually eats away your flesh, destroying tissue and blood vessels and leaving your skin a greenish, scaly mess [source: Ehrenfreund].

The drug we're talking about is krokodil (pronounced "crocodile"), the street name of desomorphine. It earned its name because it tends to make users look reptilian. It's an inexpensive but potent homemade narcotic that's caught on big-time in Russia. Russian addicts make krokodil by taking codeine tablets, a painkiller that, until 2012, could be easily purchased in that country, and mixing it with solvents such as gasoline, paint thinner or hydrochloric acid [sources: Shuster, Grimm, Rylkov]. The result is a mixture that they inject into their veins to get a high that's as powerful and pleasurable as heroin, but a lot easier and cheaper to obtain [sources: Winter, Priymak].

A 2011 study found that at least 100,000 people in Russia had injected krokodil [source: Christensen]. But of course, there are some major downsides to this drug. For one, it is highly addictive, perhaps even more so than heroin [sources: Priymak, Drug Enforcement Administration]. Worse yet, it rots away the addicts' bodies, bit by bit, leaving them looking eerily like the decaying zombies from apocalyptic movies and TV thrillers [source: Christensen].

Where did krokodil come from, and why is it so destructive? And will it ever catch on in the U.S.?

Where Did Krokodil Come From?

Since the international news media began running sensationally grisly stories about Russian krokodil abuse in the late 2000s, it'd be easy to assume that it's a new drug, invented by some Siberian mad scientist bent on creating legions of zombie-like junkies. But it actually was developed in the 1930s, for the purpose of fighting drug addiction rather than causing it. The father of krokodil is Lyndon F. Small, a renowned University of Virginia chemist, who was recruited by the National Research Council in 1929 to head a team searching for painkillers that were less addictive alternatives to morphine. Small and his colleagues spent years tinkering with that drug's chemical structure and creating synthetic variations of it. One of the results was desomorphine, the active narcotic ingredient in krokodil [sources: Mosettig, OASAS, League of Nations].

At first, desomorphine seemed promising, in part because it was eight to 10 times more potent an analgesic than morphine, and yet it didn't cause chemical dependence in monkeys. However, when researchers switched to human subjects, they found that krokodil was even more addictive than morphine, because its effects came and went more quickly, spurring addicts to use it more frequently [sources: Ehrenfreund, Carter et al.]. A 1936 report by a narcotics abuse task force for the League of Nations — the predecessor of the U.N. — reported that international experts were so worried about desomorphine's potential to create vast numbers of addicts that one even advocated a ban on its manufacture [source: League of Nations].

But that did not happen. Desomorphine was marketed for a time in Switzerland as a painkiller [source: OASAS]. It didn't show up on the streets until the early 2000s, when it was discovered by Russian addicts who were looking for a cheap high to replace the expensive, hard-to-get heroin. By purchasing codeine-based headache pills from a pharmacy and cooking them with various easy-to-obtain chemical solvents, they found that they could create an injectable substitute for heroin at a tenth of the price [source: Walker].

There are an estimated 2.5 million injected-drug users in Russia in 2013, mostly heroin users. But there is very little treatment available. The country runs just a handful of drug treatment centers; most rehab centers are operated by churches and private organizations. Methadone, commonly used to wean addicts off heroin in other countries, is banned here. The prevailing treatment method is some version of "cold turkey." Codeine, the main ingredient in krokodil, was only banned for sale without a prescription in 2012 [sources: Rylkov, Shuster].

How Does Krokodil Turn Users Into Zombies?

Neither the U.S. researchers who developed desomorphine nor the Swiss doctors who at one time prescribed it ever reported that it ate away at users' bodies and killed them. But that's exactly what has happened to Russians who abuse krokodil. A 2011 story in the Independent, a British newspaper, graphically described the effects. A man named Oleg quickly developed rotting sores on the back of his neck. Down the street, a friend of his literally began to fall apart. "Her flesh is falling off and she can hardly move anymore," Oleg explained in an interview with the paper.

Illicitly produced desomorphine has these destructive effects because addicts tend not to be very meticulous chemists. Their crude methods of manufacturing krokodil (mixing codeine with solvents like paint thinner or gasoline) means this stuff is toxic. Around the injection site, blood vessels burst, and the surrounding tissue dies, which leads to gangrene and sometimes necessitates the amputation of abusers' limbs. Additionally, the drug's acidity eats away at porous bone tissue [sources: Drug Enforcement Administration, Christensen].

Others develop potentially fatal ailments such as meningitis and pneumonia, as krokodil weakens their bodies. Because the high only lasts about 90 minutes and it takes an hour to cook the drug, addicts often find themselves literally with no time to sleep [source: Shuster].

Kicking krokodil is even worse than kicking heroin. One user told the Independent that it took him weeks at a detox clinic to conquer his dependency, during which time he suffered withdrawal symptoms that included seizures, fever and vomiting. Even after he got clean, he lost 14 teeth, because of the damage that his krokodil abuse had done to his gums [source: Walker].

Even so, he was lucky to have survived. Zhenya tellingly explained to the Independent that for someone in the throes of krokodil addiction, "You're dreaming of heroin, something that feels clean and not like poison But you can't afford it, so you keep doing the krokodil, until you die." That's yet another reason to stay away from it.

Will Krokodil Addiction Spread to the U.S.?

In 2013, a flurry of news organizations reported that krokodil abuse had spread to the U.S. The most sensational described three sisters in Illinois who supposedly had become addicted to the drug [source: Payne]. But when undercover agents from the U.S. Drug Enforcement Administration bought samples of the supposed krokodil, tests revealed that it was just regular heroin. Heroin users can develop sores, as well as bacterial infections from needle-sharing that mimic some of krokodil's effects. Other alleged krokodil users have surfaced in Arizona, but those reports remain unconfirmed [source: Grimm]. Some experts argue that krokodil is unlikely to catch on in the U.S., because codeine tablets aren't as easily obtained, and actual heroin is readily available [source: Beklempls].

In my several decades as a journalist, I've spent a fair amount of time around substance abusers, from teenaged suburban middle-class junkies in a pricey locked-ward treatment center, to a heroin addict that I once chatted with on the stoop of a Skid Row flophouse hotel. I even worked under a newspaper editor who would sneak off to the restroom to do lines of coke between deadlines. In that time, I can remember successive waves of mass-media warnings about a slew of substances ranging from angel dust to concoctions fashioned from cough syrup and soft drinks. I don't want to dismiss totally the dangers of illicit drugs. But in my own experience, the intoxicant that I've seen ruin the most lives is one that's totally legal and readily available: alcohol. When you've seen a homeless drunk in south Baltimore finish off a bottle of fortified wine and then fall flat on his face on the pavement, it's hard to imagine something more degrading and destructive.