The Details of Landing on Mars 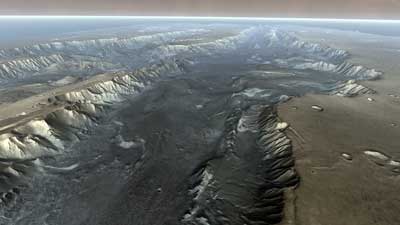 The vast Valles Marineris is a giant system of canyons on Mars and one of the many surface features scientists want to study first-hand.
Stocktrek Images/Subjects/Getty Images

Manned missions are still a long way off as many of the details of landing on Mars must be addressed. The U.S. plan is to return to the moon by 2020 and eventually build a permanent base there. Estimates on when we'll take that next step and journey to Mars are tentative. According to the British National Space Centre, the goal is for an international cooperative effort to launch astronauts to Mars by 2030.

The price tag for sending humans to Mars will vary greatly depending on the final spacecraft and mission plan design. Utilizing technology similar to what's already been developed helps keep costs more manageable. For example, the Constellation rockets are based on the Saturn Vs, making use of some design elements of the Space Shuttle program. Another money-saver that might be employed is making use of the Martian atmosphere to generate fuel, oxygen and water (like we read about on the previous page).

There is the possibility that preliminary voyages could send people into Mars' orbit without actually setting down on the surface, although many in the field argue it's pointless to explore if you're not going to get up close and personal with the surface of the planet. It's like driving to the beach and spending the whole afternoon watching the ocean from your car. This could, however, help fix some of the kinks of long-distance space travel and enable explorers to receive real-time reports from robots on the surface of the planet, without the risk and cost of a landing. Robotic vehicles that can return from Mars with samples are also in the works.

Alas, once the dust has settled around the landed spacecraft and astronauts can take those first incredible steps onto Mars' surface, they also open a whole new can of worms for scientists to solve -- mainly, how will the astronauts survive the harsh and uncompromising Martian climate, and how will they spend their time while they're there? We'll save those questions for another day.

For more information about Mars and the future of space exploration, visit the links on the next page. ­

Another consideration of landing on Mars is the possibility of cross-contamination between that planet and Earth. The United Nations Office for Outer Space Affairs (UNOOSA) has a treaty to this effect, which has been ratified by 98 countries and 27 more signing on. The treaty states that nations should, as much as possible, avoid contaminating the Earth with extraterrestrial material, especially if such contamination would cause lasting damage or alteration of conditions on Earth. We must reciprocate this sentiment with our own impact on other celestial bodies. Critics argue both ways: Some say cross-contamination could be harmful; others say the chance of Martian life causing trouble on Earth is a complete nonissue. A more moderate argument is that, while highly unlikely, there is a chance Mar­tian microbes could have a harmful impact on Earth, by competing with existing organisms for example.