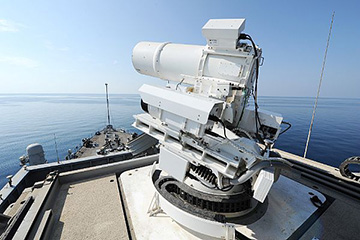 The interim Afloat Forward Staging Base on the USS Ponce conducts an operational demonstration of the laser weapon system (LaWS) while deployed to the Persian Gulf.
U.S. Navy photo by John F. Williams

Pew, pew, pew! That's the sound of warfare in the future.

Laser weapons have fueled our science-fiction fantasies ever since Luke blew up the Death Star. Despite the fact that you can't actually hear lasers, exploding death planets or any other noise in the vacuum of space, there's something undeniably awesome about zapping a target into oblivion with a lethal blast of hyper-concentrated energy.

Conventional weapons are powerful but sloppy. Dropping a bomb from a plane is great for leveling an entire munitions factory or taking out a strategic bridge. But 21st century warfare — marked by rogue terrorist cells and unmanned drone attacks — requires much more precision from military weaponry. And nothing is more laser-precise than, well, lasers!

Every major American weapons manufacturer — Boeing, Lockheed Martin, Northrop Grunman — is under contract with the U.S. Army, Navy and Air Force to develop more powerful and compact laser systems that can be deployed by warships, tanks and even airplanes.

Dismissed for decades as a science-fiction pipe dream, military-grade lasers are back in the headlines and badder than ever. In late 2014, General Atomics posted a slick video of an explosive demonstration of its laser weapons system (LaWS), a truck-size laser that looks like a high-end telescope. Mounted on the USS Ponce, a Navy warship, the swiveling weapon silently zapped targets strapped to the back of moving speedboats then took out an unmanned drone for a grand finale.

In March 2015, Lockheed Martin made headlines when it used a 30-kilowatt laser called the advanced test high energy asset (ATHENA) to bore a red-hot hole in the manifold of a pickup truck from a mile (1.6 kilometers) away [source: Moseman].

At a Department of Defense "Lab Day" in May 2015, the chief of the Air Force Research Laboratory publicly declared the U.S. military's goal of strapping a 100-kilowatt laser to a fighter jet by 2022 [source: Freedberg]. That's the closest thing to a real X-Wing fighter this side of Tatooine.

There have been incredible breakthroughs in laser technology, but will we meet the 2022 goal of mounting these bad boys on planes? 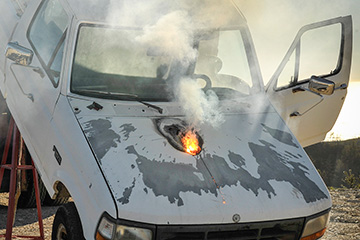 Lasers are machines that can create a highly focused beam of light and, with enough power, intense heat. The word LASER is an acronym for "light amplification by stimulated emission of radiation." The most powerful lasers can burn through steel in seconds, even from great distances.

In his 1917 paper "On the quantum theory of radiation," Albert Einstein was the first to lay down the theoretical principles behind lasers (although the name didn't exist until the 1960s). When an atom is stimulated into an "excited" state, one of its electrons temporarily rises to a higher energy level. When the electron returns to its original state, a photon of energy (particle of light) is emitted that corresponds to that energy change. Normally, the photon of energy shoots off in a random direction at a random wavelength, but not so with lasers [source: Follows].

In a laser, the emission of photons is highly controlled. Using chemical reactions, gasses or solid crystals, atoms are pumped into an excited state within a mirrored chamber. As the electrons in the atoms return to their normal state, they release photons of light in all directions.

Some of those photons, however, bounce straight off of the mirrored surfaces on either end of the chamber. Those bouncing photons stimulate more atoms in the chamber to emit photons in the same direction. After billions of these reactions, the result is a column of light that's vibrating at exactly the same wavelength (monochromatic) in exactly the same direction — that's called "coherent" or laser light.

After the first laser was demonstrated by physicist Theodore Maiman in 1960, lasers quickly entered the scientific and cultural mainstream. Today, low-energy lasers are used to read CDs and bar codes at the grocery store, while higher energy lasers are beamed from observatories to measure the precise distance of planets [source: Martin].

The race to create laser weapons has been raging for decades. The challenge has always been to create a laser that's powerful enough to generate tremendous heat across long distances, but small and stable enough to be mounted on a ship or even an airplane.

In a nationally televised address on March 23, 1983, President Ronald Reagan proposed the creation of a space-based defense technology that would zap Russian nuclear warheads out of the sky with laser-blasting satellites. Dubbed "Star Wars" by the media, the Strategic Defense Initiative (SDI) brought the first serious attention to the development of lethal lasers for the military, but the project lost funding when the Cold War thawed in 1991 [source: Encyclopaedia Brittanica].

Despite the fizzle of Star Wars, military technologists haven't lost faith in lasers as the killer app (literally) of the future. Over the past 30 years, the U.S. military and American weapons makers have invested billions in the development of lethal lasers that can be fired from military aircraft.

Boeing's advanced tactical laser (ATL), which debuted in 2008, represented one of the first major test runs of a military-grade laser in a flying warship. Hardly a lightweight, the 40,000-pound (18,144 kilograms) chemical laser was way too big to be mounted on a fighter jet, so the Air Force stuffed it in the belly of a 1950s-era C-130 transport plane [source: Adams].

The $200 million ATL could generate a laser beam 3 inches (10 centimeters) wide powered by reactions between chlorine gas and hydrogen peroxide [source: Adams]. The biggest challenge for Boeing's engineers was to design a target-tracking and aiming system that could automatically adjust to the constant vibrations and shifting coordinates of flight.

During test flights over New Mexico, the ATL successfully zapped a stationary ground target and burned a small hole in a moving pickup truck. Because the bulky ATL system relied on stores of onboard chemicals, it could be fired reliably only six times without reloading [source: Mick].

In 2010, jet-firing lasers got an upgrade with the unveiling of the airborne laser test bed (ALTB). The ALTB was also a chemical laser — the acronym is COIL (chemical oxygen iodine laser) — that was mounted onto the nose of a Boeing 747 jet. The ALTB was designed specifically as an air-to-air laser capable of shooting enemy missiles out of the sky.

During more than 200 test missions, the ALTB successfully engaged and destroyed two short-range ballistic missiles [source: MDA]. But that wasn't enough to keep the program funded. A fleet of 10 to 20 laser-fitted aircraft would have cost $1.5 billion each, far beyond what the military was willing to spend for relatively low-power weaponry [source: Schechter]. The ALTB was officially scrapped in 2012 and stripped for parts [source: MDA].

Don't worry, though. The dream of laser-firing jets is far from dead.

Despite gaps in funding for laser-firing jets, top brass in the U.S. Air Force still believe that high-altitude lasers have serious tactical benefits. While ground-based lasers have the advantage of being bigger and heavier, their beams can get warped while they pass through the atmosphere. Lasers mounted to high-altitude jets can take out enemy craft and missiles more accurately and at longer distances through thinner air [source: Freedberg].

The Office of Naval Research is paying particular attention to solid-state lasers, which are weapons that use electric power to fuel reactions in solid chemical compounds. Solid-state lasers are smaller, lighter and don't need to be refueled as often, making them excellent prospects for airborne deployment [source: Schechter].

A working prototype for a such a lightweight, solid-state laser is the Navy's Laser Weapon System (LaWS), currently mounted on the USS Ponce docked in the Persian Gulf. The 30-kilowatt laser packs enough heat and accuracy to burn through a drone's engine in mid-air or explode a grenade launcher strapped to the back of a moving speedboat. However the laser can't work against high-speed targets like jet fighters [source: CBS News].

After the $40 million cost to build the laser, firing the battery-charged weapon costs only $0.59 per shot in electrical costs. Compare that to the hundreds of thousands of dollars or even $1 million to fire one current anti-missile interceptor like the Navy Standard Missile [source: Freedberg].

The goal of the military is to develop a 100- to 150-kilowatt solid-state laser for airborne deployment [source: Freedberg]. Drone-maker General Atomics Aeronautical Systems claims to have one in the works. Its Generation 3 high-energy laser (HEL), a solid-state laser "pumped" by a lithium-ion battery, will be able to produce beams as powerful as 300 kilowatts [source: General Atomics].

The Gen 3 is also relatively compact, measuring just 4.25 feet by 1.3 feet by 1 foot (1.3 meters by 0.4 meters by 0.3 meters). At that size, the Gen 3 will fit inside General Atomics' tactical laser weapons module (TLWM), an externally mounted laser pod that can be deployed on tanks, Navy warships and jet aircraft [source: General Atomics].

Although there are no videos of Gen 3 in action — it's classified — a General Atomics vice president told a U.S. News reporter that the company is "far beyond killing boats and unmanned aerial vehicles." Gulp.

The Sound of Star Wars

The military already deploys truck-mounted lasers that automatically zap drones or mortar rounds. They work great, with only one problem: Nobody can tell when they're firing. Real lasers are invisible and silent. To remedy this, Boeing engineers have lifted laser sound effects from "Star Wars" and "Star Trek" to play back each time the beams are fired [source: Atherton]. Pew pew pew!

As with jet packs and flying cars, I've always assumed that the future would include laser guns. I'm heartened/terrified to learn that the military continues to seriously pursue laser weaponry, and I'm unapologetically psyched to hear that they're adding "zap!" sounds when these death rays are fired. At least lasers are mostly seen as "defense" weaponry, shooting down incoming missiles and mortars to protect troops and innocent lives. That said, some in the military are also interested in these silent, invisible long-range laser weapons for their promise of "plausible deniability" [source: Hambling]. Who blew up the submarine? Not us!