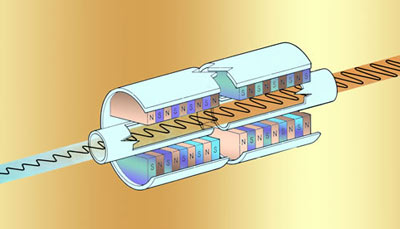 Illustration of a free electron laser. A beam of electrons is sent through an undulator -- an array of magnets with alternating north and south poles. The magnetic field in the undulator forces each bunch of electrons to oscillate back and forth, causing them to emit a laserlike beam of light.
Image courtesy Flavio Robles/Creative Services Office, Lawrence Berkeley National Lab

There are many different types of lasers:

There are several lasers currently being used for military purposes. One that's being researched and developed is the free electron laser (FEL). In the 1970s, Stanford physicist John Madey invented and patented the FEL, which consists of an electron injector, a particle accelerator and a magnetic undulator or wiggler. It works like this:

In 1977, the U.S. Air Force developed a chemical oxygen-iodine laser (COIL). The energy source for the COIL is a chemical reaction, and the lasing medium is molecular iodine. Here's how it works: atoms, heat and byproducts, including water vapor and potassium chloride.

The COIL laser is used aboard the Air Force's Airborne Laser, which we'll talk about next.