How Are We Exposed to Lead? 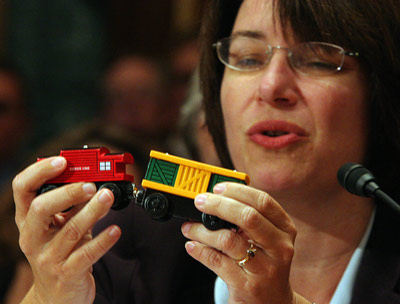 Even though public health officials grew wise to the toxicity of lead decades ago, lead still lingers in the paint and pipes of older homes and other buildings (built before 1978). Lead-based paint chips and flakes that peel away from the interior and exterior walls are one source of exposure. Water that travels through and leaches from lead pipes is another source. Some home repairs, such as removing painted drywall, can send lead dust into the air. In addition, lead from soldered metal containers, lead-glazed pottery, lead glass crystal and lead-painted toys serve as other routes of exposure in the home.­

In the environment, lead-based products can leach the element into the water and the soil. For example, water running from lead drainpipes or running off walls painted with lead-based paints will carry the metal into the soil. Waste dumps where lead batteries may have been improperly disposed also can leach lead into the ground.

What about the air? In 1970, the bu­lk of lead emissions (78 percent) came from on-road sources, such as cars fueled with leaded gasoline, according to the U.S. Environmental Protection Agency. Metal processing -- remember smelting? -- contributed another 11 percent,. When the EPA ran the numbers about a quarter-century later, the agency found that the emission sources had changed dramatically. Metal processing now claimed 52 percent of lead emissions, while waste disposal (16 percent), fuel combustion (13 percent), nonroad sources (13 percent) and other sources (6 percent) trailed far behind. The drastic change, of course, was due to the ban on using lead additives in motor fuels that took effect in February 1996. Many other countries have enacted similar bans.

Lead in the air, water or home can accumulate in your body in several ways. For example, you could drink contaminated water or swallow lead dust. You probably don't like to eat paint chips or lick toys with lead-based paints, but your kids might. Either way, once it's ingested, lead gets absorbed by the small intestine and enters the bloodstream.

Lead also can enter the body through the lungs when you inhale lead dust or lead-containing air pollution. Workers in the metal processing industry (smelting) and construction workers may be exposed to lead dust and fumes. Once inhaled, lead gets absorbed through capillaries in the lungs and enters the bloodstream. People who work with lead may also absorb it directly through the skin.

Doctors measure lead exposure by taking a sample of blood (finger or heel stick). They can also measure exposure by assessing the zinc protoporphyrin levels in your blood. This zinc compound is a by-product of the breakdown of red blood cells observed in high lead exposure; however, this test is not as sensitive as the blood lead test.

Keep reading to learn how to get the lead out.

How Much Is Too Much?

The U.S. Centers for Disease Control and Prevention have established that a blood level greater than or equal to 5 micrograms per deciliter is of concern in young children. Adults can have a slightly higher exposure.