10 Ways to Trick Yourself Into Being Happy

Use Your Money to Do Something Nice for Someone Else 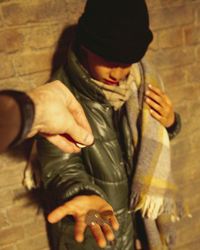 You can get a pretty good natural buzz giving money to strangers, it turns out.
George Doyle/Getty Images

People like to congratulate themselves when they commit a selfless, altruistic act, like donating to charity or helping a stranger in need. While these things certainly are nice and make the world a cheerier place, there's actually no such thing as a truly selfless act. It sounds a bit cynical, but MRI studies show that when we do an act of kindness for someone else, we're actually getting something in return -- pleasure. The brain's reward center, the region that's activated when something good happens to us, also comes to life when we do something nice for someone else.

This means chemicals that produce happy feelings -- like dopamine -- flood our brains when we cover the toll for the person in the car behind us or pick up an extra cheeseburger for a homeless guy when we're out at lunch.

A 2008 study found that people tend to get happier when they spend their money on others. Uninformed participants who worked at a medical supply company received $5,000 bonuses. The researchers found that employees who spent one-third or more of their money on someone else scored a full point higher on a five-point happiness scale.

It's your money; buy some happiness with it.