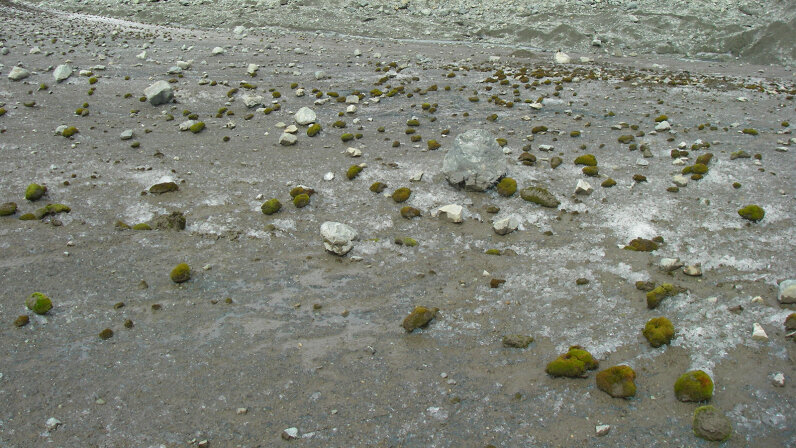 Glacier mice are balls of moss that form on the surface of a glacier and move together, up to an inch at a time, like a herd of little mice. Timothy C. Bartholomaus

If Sherlock Holmes was part scientist, part detective, he might want to trade in his capelike coat for a parka to study the mystery of fuzzy, green glacier 'mice.' But he'd be sure not to let their name throw him off the trail. These glacial inhabitants aren't actually mice — or any animal at all — they're roundish balls of moss about the size of a tennis ball. The perplexing plants hang out on the surface of specific glaciers in Alaska, Iceland, Svalbard and South America (yes, there are glaciers in South America — about 80 percent of South America's glaciers lie in Chile and form exclusively in the Andes).

Scientists have long been scratching their heads about how the glacier mice form and survive, but they do know that when glacial winds bring together clumps of dust and organic debris, a layer of moss can form around the clump to create a ball. This formation keeps the majority of the moss from having direct contact with the ice.

Of course the fact that a plant can thrive in such a cold climate and infertile ground is surprising, but the mystery goes deeper. Despite not having feet or tentacles of any sort, these squishy moss balls can move. OK, it's a slow 1 inch (2.5 centimeters) a day, but it's still impressive for a little ball of fuzz — and is likely one part of their secret to survival.

If you're thinking you've solved the case and believe wind or a downhill slope is propelling their movement, scientists too hoped that was the reason. But glaciolist Tim Bartholomaus and his wife Sophie Gilbert tracked their movement using color-coded bracelets. They learned that glacier mice travel with great intentionality, moving in sync with their fellow mossy friends in a herdlike fashion. Their findings were reported in a study published in the journal Polar Biology in April 2020.

Scientists note that the ice underneath the moss ball is protected from the sun, and as the surrounding ice melts, the glacier mice are left perched atop a tiny ice pedestal. It seems they then throw in some gymnastics, rolling off the pedestal into a new position that orients the bottom portion of the ball toward the sun to keep it from dying.

No one knows yet why or how they move in herds, but according to an interview in Popular Science, Bartholomaus is playing around with the idea that the uneven shape of the arctic fuzz balls — one fat end and one skinny end — causes them to always roll in one direction. In the future, scientists hope to use time-lapse cameras to track the movements of a large group of mice over a long period of time as well as explore whether the sediment atop the glacier is a form of volcanic ash that creates the ideal environment for them to thrive.

The glacial mystery continues, but scientists are on the case, hoping to better understand the surprisingly rich glacial ecosystem and bring attention to the rapid loss of glaciers each year.

Glacier mice aren't nature's only strange, fuzzy spheres. The endangered, bright green balls known as marimo algae form from filaments floating in shallow lakes that rise to the surface during the day and sink to the bottom at night.