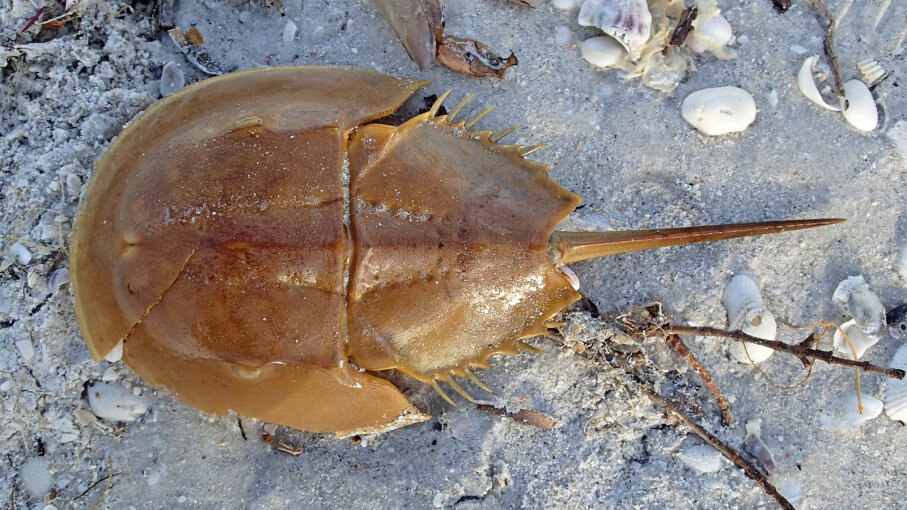 The Atlantic horseshoe crab (Limulus polyphemus). The horseshoe crab is valuable to the tune of half a billion dollars a year to the biomedical and commercial fishing industries. Flickr (CC by 2.0)

When you look at a horseshoe crab, you're looking a half billion years into the past. These primitive animals were around long before the dinosaurs and survived ice ages and asteroids almost unchanged. Their cozy ecological niche necessitated few body modifications, so while horseshoe crabs today are different than their ancient ancestors, they're not that much different.

You're also looking at a creature whose value approaches a half billion dollars a year to the biomedical and commercial fishing industries. The blood of horseshoe crabs is extremely important to science – it's capable of detecting a certain type of bacteria in humans, thereby saving lives. More on that below, but a bit of biology first.

Horseshoe crabs resemble semicircular armored tanks and are an appropriate Army-green to brown color. Despite their name, they are more closely related to spiders and scorpions than crabs. Of the four species of horseshoe crabs around today, Limulus polyphemus is found along North America's eastern coast from Maine to Mexico. The other three species are found in Southeast Asia.

The horseshoe body has three sections. The large head, or prosoma, houses the brain and heart, and six pairs of appendages are attached to it. In males, the first pair are hooklike and used to clamp onto a female during mating. In the opisthosoma, or abdomen, muscles control the gills and telson (tail). The telson serves as a rudder and helps crabs flip over if they get upended during spawning. Females are a third bigger than males and can weigh twice as much, upwards of 10 pounds (4.5 kilograms). It takes about 10 years for a horseshoe crab to grow to adult size.

Spawning peaks in May and June at high tide during the full or new moon. The female digs a hollow in the sand beneath her and lays a cluster of several thousand eggs, which are fertilized by the male clinging to her back. Satellite males closely follow the couple for the chance to pass on their genes to some of the eggs. She repeats the process several times per night and may spawn for several nights. All told, each breeding female can lay up to 100,000 eggs a season.

Delaware Bay has the largest spawning population in the world and is a stopover site for shorebirds in the Atlantic Flyway, the north-south path to and from arctic breeding grounds. Up to a million birds flock to this site to gorge on horseshoe crab eggs and build their strength for the journey north. But decades of overharvesting crabs as bait to catch whelk, eel and conch has decimated their populations and turned the egg feast into near famine. Hundreds of thousands of crabs are taken every year for bait.

Then there's the effect of shoreline development and habitat loss. Beaches, intertidal flats and deep bay waters are all necessary for crab survival and reproduction, but are increasingly encroached upon by construction and poisoned by fertilizer runoff.

"We monitored more than 115 sites on Long Island for over 17 years and found that horseshoe crab habitat has declined by more than 8 percent," says John Tanacredi, professor of earth and environmental sciences at Molloy College and director of the Center for Environmental Research and Coastal Oceans Monitoring, in an email. "Loss of habitat means loss of breeding animals, clearly seen in the long-term decline in horseshoe crabs in the area by about 1 percent per year."

The Price of Blue Blood

Though crab health is critically threatened by humans, we benefit enormously from crabs. Horseshoes' copper-based blue blood contains a clotting agent called Limulus amoebocyte lysate (LAL), which detects endotoxins released by bacteria that can cause fever, stroke, organ damage and even death. LAL is used to test drugs, vaccines and medical devices and is so essential to biomedical companies that manufacturing around the world would halt if the supply was cut off. Understandably, LAL is one of the most valuable fluids on Earth, at a price of about $15,000 a quart.

Horseshoe blood developed this remarkable clotting ability as a response to life in an oceanic soup of bacteria. When microbes invade a mammal, miles of tiny blood vessels limit their spread and white blood cells fight them off. Not so with horseshoe crabs. Their blood moves freely through tissues and organs, providing a wide playing field for bacterial infection. But bacteria and crabs have co-evolved for millions of years, and crab defenses have, too.

Horseshoe crabs don't have an immune system, exactly. Their single type of blood cell, an amoebocyte (a cell that can move around), does all the usual work of blood cells – repairing wounds, gobbling up dead cells, transporting and storing digested material. But these amoebocytes also release a substance that clots like crazy when they detect a bacterial endotoxin. Clots entrap the invading bacteria, limiting further infection. Larger clots can also seal the wound.

Before LAL, biomed companies used rabbits to test for endotoxins (rabbit blood also tends to clot in the presence of toxins). If after injection with the test substance an animal developed signs of infection — this could take up to 48 hours — the sample was determined to be contaminated (and the rabbit died). The discovery of LAL has saved countless rabbits from fatal testing, but in turn hundreds of thousands of crabs every year participate in an involuntary blood drive.

To harvest horseshoe crab blood, the unsuspecting creatures — larger females are preferred — are hauled out of shallow coastal areas and brought to a lab, where they're chilled for an hour or so and then mounted to a rack. A needle is inserted into tissue around the heart, and up to 30 percent of the crab's blood is drained off. After bleeding, the animals are returned to the ocean. The sooner they're returned, the more likely they'll survive.

That's important, because though biomed is considered a low-mortality "catch and release" use, as many as 30 percent of horseshoe crabs die from the bleeding process. "The supply is limited, and the toll is huge. Some 600,000 animals in the U.S. are harvested each year for this purpose," says Tanacredi.

And the long-term impact may be much worse. In areas where the most crabs are harvested for bloodletting, fewer females show up to spawn. The problem is worse in Asia, where no animals are returned to their habitat. "In Singapore during the breeding season, 10,000 adults per day are harvested, bled out and then prepared for sale as food. At this rate they could be extinct there in a decade," Tanacredi says. Our own Limulus polyphemus was placed on the vulnerable list by the International Union for the Conservation of Nature in 2016.

Dr. Tanacredi boils down next steps needed: "Three things have to happen immediately and consistently. One, stop all collection for bait. Two, get FDA approval of synthetic LAL. And three, protect crab breeding sites."

There has been progress on synthetic LAL. Although an effective LAL substitute has been available for 15 years, only one facility could produce it and biomed companies didn't want to rely on a single source. But then another facility began production, and in 2018 Eli Lilly and Company announced it would phase out LAL by 90 percent in the next few years and phase in synthetic LAL. Good news indeed.

Now That's Interesting
Horseshoe crabs can be found in abundance on many eastern U.S. beaches — they commonly become overturned by the action of waves during spawning and may not be able to right themselves, which leads to death. But not every horseshoe crab you see on the beach is dead — they also molt, leaving behind their old exoskeleton and forming a newer, bigger one.