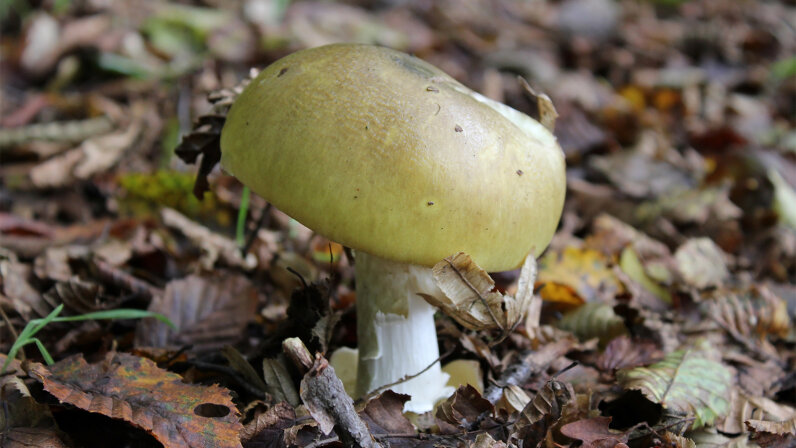 Amanita phalloides, the death cap mushroom, is establishing itself across the North American continent, increasing the need for awareness of its dangers from the general public. Wikimedia Commons (CC BY-SA 3.0)

Following a mushroom bloom in the San Francisco Bay Area in late 2016,14 people consumed a poisonous fungus and fell drastically ill. One child even suffered permanent neurological damage. These were just some of the latest in a string of poisonings over the past few decades — a small handful of which proved to be fatal. The toxic cause: Amanita phalloides, better known by its grim moniker, the "death cap" mushroom.

Amanita phalloides is what's known in the world of mycology as a "mutualist," according to Anne Pringle, the Letters and Science Rubenstein Professor of Botany and Bacteriology at the University of Wisconsin-Madison. "A mutualism is, very simply, a relationship between two organisms of different species that result in a benefit for both organisms," says Pringle. As an ectomycorrhizal fungus (a fungus that grows outside the plant's roots), the death cap mushroom forms this relationship with a host tree. The fungus grows in the soil and mingles with the tree's roots, drawing out nitrogen from the soil and bringing it to the tree in exchange for carbon.

In California, where the death cap mushroom is fairly common — possibly due to its pleasant Mediterranean climate — the fungus normally grows in tandem with coast live oak. On the east coast, the fungus usually attaches to pine. And in the fungus' native Europe, it's a combination of beech and oak.

Where Did the Death Cap Come From and Where Is It Spreading?

Pringle's research confirms what other mycologists have theorized: Amanita phalloides is a non-native species that was introduced to California from Europe in the not-too-distant past. How did she establish this? "By building an understanding of the relationship between the California populations and the European populations," says Pringle. If Amanita phalloides was native to California, it would be genetically different from the European variety. But the California death cap is genetically interrelated to the European one. Ergo, the fungus is one and the same. Pringle states that the first known sightings in California were at the Del Monte hotel in 1938 and on the University of California-Berkeley campus in 1945.

While the death cap is considered an invasive species in California, that's not necessarily the case on the East Coast. It's partly due to a difference in habitat. In California, the fungus grows in pristine environments, particularly in forested areas like the Point Reyes National Seashore in the greater San Francisco Bay Area. On the East Coast, you'll often find it in more contained urban settings like parks, where someone may have planted a tree that hosts the death cap. It's the spreading of the fungus that makes it invasive on the West Coast compared to the East Coast. The fungus is spreading in British Columbia too. Some scientists like Pringle are interested in managing the spread of invasive fungi like the death cap. Pringle's team has mapped nearly 100 genomes of phalloides, so it's possible that future research could help curb the mushroom's deadly reach.

What happens if you accidentally ingest a death cap mushroom? According to Rais Vohra, medical director for the Fresno-Madera Division of the California Poison Control System, Amanita phalloides contains a couple of toxins. These include phallotoxin, which "causes severe nausea, vomiting, and dehydration with resulting kidney damage and electrolyte imbalances," says Vohra. But the kicker is the "alpha-amanitin (also called amatoxin)," which "stops cell functioning by targeting the transcription of RNA by RNA polymerase II, and this prevents the cell from making essential proteins and cell components." This last toxin descends quickly upon the liver. Previous victims have required emergency liver transplants.

The poisoning is spread out over three phases, as it can take several hours for symptoms of the death cap's toxins to present in the body. Phase I: nausea and vomiting. Phase II: in a cruel twist, the nausea and vomiting might cease, but liver damage progresses in dramatic fashion. Phase III: advanced liver failure, seizures, loss of blood pressure, brain swelling and comas can occur. And, in the worst-case scenario: death. Yikes.

Not for Human Consumption

The No. 1 takeaway: Do not consume the death cap in any form. In fact, unless you're extremely familiar with the fungi in your area, Pringle urges that you hold off on wild mushroom foraging, as it can be tricky to identify and separate poisonous mushrooms from safe ones. If you spot a mushroom that you suspect may be an Amanita phalloides and want help verifying its identity, Pringle suggests heading over to Mushroom Observer to seek guidance. In addition to its coloring, which Pringle describes as "olivaceous with a green tinge," mature death caps also have "brown striations" or markings on the cap and possess a unique ring around their stem.Touching Amanita phalloides should be fine, since there's no evidence that the toxins transmit through skin contact. However, Pringle advises that you should wash your hands after handling any sort of mushroom.

But let's not get too carried away. Although they cause the majority of mushroom-related fatalities globally, Amanita poisonings are still pretty rare in the U.S. Moreover, Vohra says the fatality rate for Amanita poisonings is believed to be in the range of 10-15 percent of cases. That's nothing to sneeze at, but it's not exactly a death sentence, either.

IMPORTANT: If you suspect that you've ingested a death cap (or any poisonous mushroom), call the American Association of Poison Control Centers' toll-free, 24-hour hotline at 1-800-222-1222 immediately. If you live outside the U.S., contact the local poison control center in your region or country.

Now That's Interesting
Legend has it that Agrippina may have murdered Roman Emperor Claudius to secure the throne for her son, Nero. The murder weapon? Many speculate that it was a poisonous mushroom, perhaps Amanita phalloides.