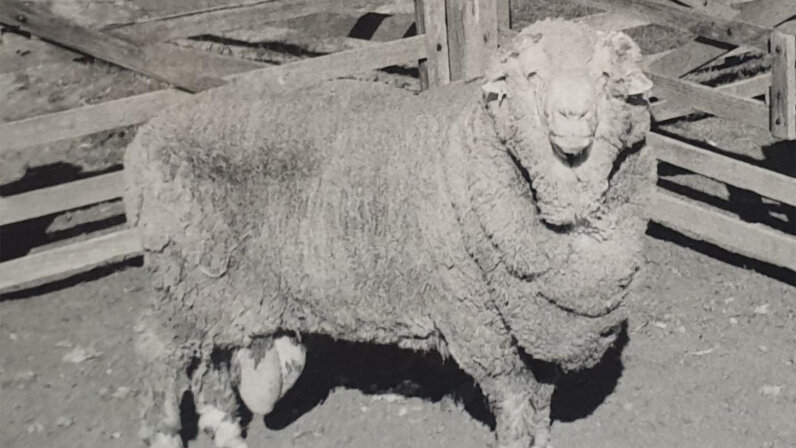 One of the original semen donors, 'Sir Freddie,' in 1969. Walker family

An incredible cryogenic triumph has occurred, everyone: Some sheep sperm first frozen in 1968 has been used to impregnate 37 ewes. It worked better than anyone expected, and as a result, there are a bunch of perfectly healthy lambs in Australia whose fathers lived long enough ago to be their great-great-great-great-great-great grandfathers.

"We believe this is the oldest viable stored semen of any species in the world and definitely the oldest sperm used to produce offspring," said Dr. Jessica Rickard, a postdoctoral fellow in the Sydney Institute of Agriculture, in a press release.

The researchers weren't sure this would be the outcome when they decided to try inseminating a bunch of ewes with some 50-year-old sheep semen pellets they dug out of the deep freeze in 2018.

But the results were pretty remarkable: Of the 53 ewes that were inseminated with sperm stored in liquid nitrogen at minus 320.8 degrees Fahrenheit (minus 196 degrees Celsius) since the time of the Lyndon B. Johnson administration, 34 were successfully impregnated, yielding a pregnancy rate of 61 percent. The pregnancy rate among 618 ewes impregnated with recently frozen sperm was 59 percent.

Dr. Steven Salamon performs an artificial insemination on a sheep in the 1960s.
Walker family

The results are part of a long animal reproduction research tradition at the University of Sydney in Australia. The original semen samples were donated from four ram sires owned by the Walker family at their then-ranch at Ledgworth, frozen in 1968 by Dr. Steven Salamon. "Sir Freddie," one of four rams that sired these 21st-century lambs, was born in 1959 and sold to the Walker's sheep farm in New South Wales in 1961. The Walkers now have 8,000 sheep at Woolaroo, their ranch at Yass Plains, and maintain a relationship with the animal breeding program at the University of Sydney.

Sir Freddie and his colleagues might not have been aware of their legacy at the time, but this outcome is exciting for those interested in freezing the sperm of wildlife in danger of extinction.

Now That's Interesting
University of Georgia's Regenerative Bioscience Center is currently putting together a "frozen zoo" for big cat species in the hopes that it will one day help save a species from extinction.