Death Valley – a name couldn't get more directly evocative than that. It's the hottest, lowest and driest place in North America, and its reputation that of a bleak place, bereft of visible life. But thanks to a perfect confluence of weather conditions, Death Valley National Park is seeing a serious explosion in its wildflower population right now, blanketing the valley in yellows, pinks, purples and white.

While the national park, which spans 5,219 square miles (13,517 square kilometers) of California and Nevada desert, sees small flower blooms every spring, what's happening now is a once-in-a-decade event. Known colloquially as a "super bloom," the current floral phenomenon is due to significant rainfall in September and October 2015 and the current El Niño weather pattern. Previous super blooms happened in 1998 and 2005, and also occurred in El Niño years.

"I'm not really sure where the term 'super bloom' originated," says park ranger Alan Van Valkenburg, a Death Valley resident for 25 years, in a park press release. "But when I first came to work here in the early 1990s I kept hearing the old timers talk about super blooms as a near mythical thing – the ultimate possibility of what a desert wildflower bloom could be."

The peak blooming season for the seven species of wildflower that can populate the valley floor is right now, while April through July will offer a chance to see flowers that live at higher elevations on mountain slopes and canyon sides.

"Right now is the best time to visit Death Valley in over a decade," says Death Valley superintendent Mike Reynolds in the press release. "The flower display is astounding and this is a rare time to experience one of the most incredible displays Death Valley has to offer. We don't know how long the bloom will last so come now!"

Can't make it all the way out West? Check out these images from this special time below, and make sure to watch the video at the top of this article to learn more.

The floor of Death Valley is normally dry and lacking plant life, though a current super bloom has blanketed the area in wildflowers.
Glenn Lewis/Flickr
The notch-leaf phacelia (Phacelia crenulata) is one of the more strikingly colorful wildflowers in Death Valley.
RobynBeck/AFP/GettyImages
The desert five-spot (Eremalche rotundifolia) is also known as a lantern flower or Chinese lantern.
Mark Boster/LA Times/Getty Images
Flowering desert plants like this one in the Cryptantha family are commonly called cat's eyes and popcorn flowers.
Mark Boster/LA Times/Getty Images
The fragrant Atrichoseris platyphylla is a weedy-looking plant better known as tobacco weed, parachute plant or gravel ghost
Robyn Beck/AFP/Getty Images
Phacelia distans is also called scorpionweed or blue phacelia, and is common on roadsides in the Southwest less so in Death Valley.
Glenn Lewis/Flickr
The pebble pincushion (Chaenactis carphoclinia) grows from a seed covered in papery scales.
Robyn Beck/AFP/Getty Images
The park has seen an increase in the number of visitors due to the once-in-a-decade nature of the "super bloom."
Robyn Beck/AFP/Getty Images
It's been 11 years since Death Valley experienced a similar wildflower explosion.
David McNew/Getty Images
Now That's Cool
Death Valley is known for its "sailing stones," rocks as big as 700 pounds (318 kilograms) that mysteriously move around the dry lakebed seemingly on their own. Researchers finally solved the mystery in 2011, identifying ice and wind as the culprits. 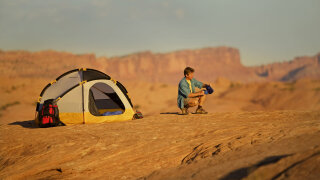 How Camping in the Desert Works