Browse the article How tall can a tree grow? 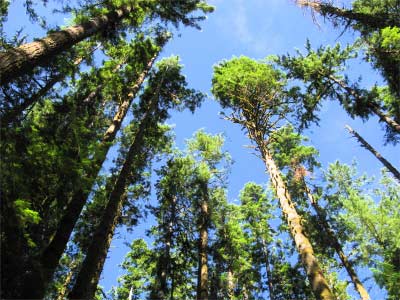 One study found that Douglas firs have the highest theoretical height, but most of the world's tallest trees are redwoods. See more pictures of trees.
© iStockphoto.com/sassy1902

­In 2008, a study proposed that the maximum height for a Doug­las fir -- one of the world's tallest trees -- is about 453 feet (138 meters) [source: Kinver]. But why is there a limit? Trees are sup­posed to be nature's skyscrapers, impossible to hem in. This cap exists because trees can only pull water so far up their trunks.

The transporters in question are pitted dead cells, called tracheids, that move water from one cell to the next. The diameter of these all-important pits shrinks as you ascend into a tree's upper reaches, complicating water transport. Eventually the flow of water reaching the leaves and branches near the top dwindles off or stops, and the struggling sections experience "drought stress." They become dehydrated and die, establishing a de facto maximum height for that tree.

­Researchers think these progressively narrowing tracheids help trees to survive. Height poses the problem of air bubbles. The­ taller the tree, the more likely it will develop a xylem embolism, a process in which air bubbles block the passage of water. (Xylem is the tissue that makes up a tree's vascular system and allows it to transport water and minerals from the roots to the rest of the plant.) A xylem embolism, then, is similar to a human air embolism, in which air enters the bloodstream and causes potentially severe complications. The tracheids try to prevent such air bubbles and withstand the increased pressure, but that protection comes at a price: less water and, the researchers suggest, a cap on how tall trees can grow.

Another tree height study, published four years prior, posited the maximum height of a tree at 426.5 feet (130 meters) [source: Amos]. The study examined coast redwoods, or Sequoia sempervirens, currently the world's tallest trees, and based the projection on factors like existing weather conditions, photosynthesis levels, water flow and carbon dioxide levels. Not surprisingly, "healthy" factors, like water flow and photosynthesis, decreased in the higher portions of the massive trees, while unhealthy factors, like carbon dioxide, increased. But ultimately, as with the firs, it all comes down to xylem.

These redwoods pull water up through their trunks as other trees do, although they can absorb some water from the fog that often surrounds them in their native California and Oregon environments. Before attaining their maximum height, they shoot up about 9.8 inches (25 centimeters) annually [source: Amos].

­Next, we'll consider other ways of addressing tree size and talk about what may be the world's largest organism. 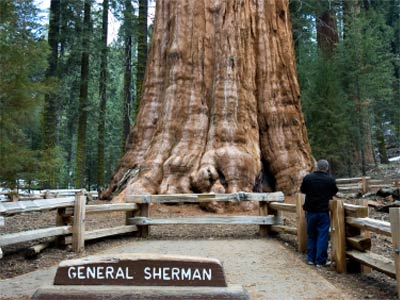 So far, General Sherman, a giant sequoia, holds the title of being the world's most massive single tree.
© ­iStockphoto.com/PierG

­Tree size is often much more than just height. General Sherman, a giant sequoia -- one of two types of redwood found in California, the other being the taller, skinnier coast redwood we just mentioned --  is the world's heaviest and most voluminous tree at around 6,167 tons (5,595 metric tons) and 52,000 cubic feet (1,487 cubic meters) [sources: Britannica and NPS]. Located in California's Sequoia National Park, General Sherman is 274.9 feet (83.8 meters) high, but it's not the tallest tree [source: Britannica]. That honor belongs to a coast redwood named Hyperion, which clocks in at 379.1 feet (115.5 meters) tall [source: Leff]. General Sherman has a trunk circumference of 102.6 feet (31.1 meters), but it's narrower than a tree called El Arbol del Thule in Oaxaca, Mexico, that has a maximum circumference of 178 feet (54 meters) [sources: NPS and Barnett].

So there are many ways of looking at tree size, just as there are various ways of looking at what is the largest living organism. Some scientists consider massive reefs like Australia's Great Barrier Reef to be giant living organisms. There are also huge fungi out there, such as a 1,500-acre (607-hectare) fungus discovered in Washington, which was once considered the world's largest organism (at least in terms of area) [source: Grant].

But the world's most massive living organism is likely one group of quaking aspen trees located in Utah's Wasatch Mountains and nicknamed Pando (Latin for "I spread") [source: Grant]. Pando is considered one organism because the trees in the group share an identical genetic code and a common, interconnected root system.

The Pando trees are basically clones of one another. New trees are made as stems spread out as far as 100 feet (30 meters) from the base of the original tree and then periodically take root, creating new, genetically identical, connected trees. The process repeats itself with the clone trees, weather and other conditions permitting. The process, known as vegetative reproduction, is how strawberries and many other plants reproduce.

Individual quaking aspens have narrow trunks and grow up to 100 feet tall [source: NPS]. Owing to their reproductive process and ability to thrive in harsh environments, quaking aspens are the most common tree in the United States.