Does Botox make you happier when it takes away your frown? 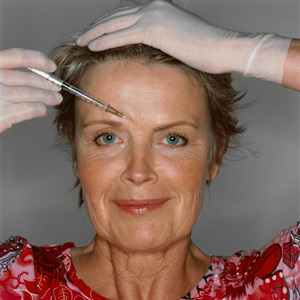 Do we smile because we're happy or are we happy because we smile?
Stockbyte/Getty Images

Some people seeking an alternative to facelifts and other forms of cosmetic surgery are turning to Botox®. But does Botox make you happier when it takes away your frown? To find out, we need to learn a bit about the stuff.

Botulinum toxin A is marketed under the trade name Botox, and it's related to a rare yet serious illness called botulism. Fortunately, you can only get botulism only by making contact with something contaminated by a neurotoxin like Botulinum toxin A. (Neurotoxins come from a strain of bacteria known as Clostridium botulinum.)

Most folks who get Botox injections get them to remove facial wrinkles, like the ones around the mouth that can make you look like you're frowning. Botox softens wrinkles by paralyzing the underlying muscles for several months. The rationale is simple: What can't move won't wrinkle.

Researchers have learned that Botox customers may get an added perk that's more than skin deep. When the muscles that control frowning are frozen, a person tends to smile more -- and it's that single act of smiling that produces feelings of happiness [source: Womack]. In fact, studies show that displaying expressions of positive emotions can actually put you in a good mood [sources: Jameson, Wallace]. Some behavior therapists colloquially call this method of easing depression the fake-it-till-you-make-it effect [source: Brink].

Although Botox might make you look and feel good, there are some risks to getting these chemical injections that may just wipe that smile off your face.

When you undergo any medical procedure, you risk the possibility that something can go wrong -- and that would make anyone unhappy. Botox is no exception. If it inadvertently spreads to other parts of your body, you'll get botulism, which can be fatal. Botulinum toxin A blocks the neurotransmitters in your muscles and makes them relax. That sounds simple enough, but relaxing certain muscles -- like those controlling the esophagus or lungs -- can cause death. If your eyelids get droopy, your mouth gets dry, your speech gets slurred or you experience difficulty swallowing after getting Botox treatments, seek medical help immediately.

Despite the dangers associated with Botox, there's evidence that it actually does make patients happier. A study published in the March 2009 issues of Journal of Cosmetic Dermatology involved a group of 25 cosmetic surgery patients. Twelve received injections of Botox or a similar neurotoxin, while other 13 received some other sort of cosmetic remedy for their wrinkles. Two weeks later, the patients filled out a questionnaire concerning depression and anxiety. The Botox cohort had lower depression, anxiety and irritability scores than the others. What's more, the Botox patients didn't feel any more or less attractive than the others. In other words, the Botox group's improvement in mood was no mere boost in confidence -- the treatments may have actually made the patients happier people [source: Harrell].

Is there a way to remove wrinkles that doesn't involve injections or surgery? The makers of an audio CD called Hypnox claim that listening to it regularly can soften wrinkles in as little as two weeks. The CD uses hypnosis to encourage relaxation and positive affirmations that are supposed to remove your frown [source: Yaskin]. Although there's no concrete proof that Hypnox fades wrinkles, it could produce that feel-good effect we've already explored. There are creams and potions available that claim to reverse the aging process and bring you a youthful, wrinkle-free appearance, but they don't claim to be as effective as a facelift -- or Botox.

No one can say for sure whether Botox makes you happier when it takes away your frown, but looking good often makes people feel good. And that could make you happier.

In 2008, the U.S. Food and Drug Administration (FDA) issued the first of two warnings about Botox after 16 people died after getting them. In addition, 87 others were hospitalized for various adverse reactions to the drug. A significant number of those who died after getting Botox shots were children being treated for cerebral palsy. Cerebral palsy is an incurable condition caused by injury to the brain that limits a person's ability to control his or her muscles. The children's doctors administered Botox to relax stronger muscles and used physical therapy to help strengthen the weaker ones [source: FDA].

Do you have to be intelligent to be evil?
Try These 5 Daily Habits to Improve Your Life This Year
Now We're Stressed Out? History Shows It's the Oldest Emotion