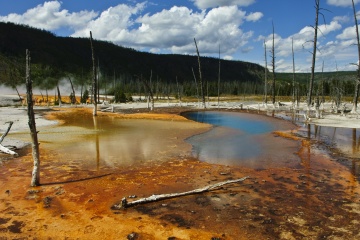 They're found virtually everywhere on Earth. It's impossible to have a full grasp of the number of bacteria on the planet at one time, but some estimates point to some 5 octillion microbes such as bacteria and archaea – that's 10 to the 28th power! [source: Whitman et al.]

Pinning a number on how many species, or classifiable types, of bacteria there are also remains difficult. One estimate points to approximately 30,000 formally identified species, but scientists are constantly learning and adding to their knowledge base and think we haven't scratched the surface for the true number of species out there [source: Dykhuizen].

The truth is that bacteria have been around for a long, long time. In fact, they gave rise to some of the earliest known fossils, dating back 3.5 billion years [source: University of California Museum of Paleontology]. Scientific evidence suggests cyanobacteria began creating oxygen between 2.5 and 2.3 billion years ago in the world's oceans, which gave rise to the Earth's atmosphere and abundant oxygen for us to breathe [source: Konhauser et al.].

Bacteria can survive in air, water, soil, ice and extreme heat; on plants; and even in our intestines, on our skin and on the skin of other animals.

Some bacteria are extremophiles, which means they can withstand extreme environments that are either very hot or cold or that lack the nutrients and chemicals we typically associate with life. Researchers have uncovered bacteria in the Mariana Trench, the deepest spot on Earth under the Pacific Ocean, in addition to underwater heated vents and in ice.

But the fun extends beyond the researchers in the field. Tourists are fascinated with bacteria's more beautiful natural beauty in places like Opalescent Pool at Yellowstone National Park, which features brightly colored thermophilic (heat-loving) bacteria coloring the landmark.

Houston, we have bacteria.

Bacteria that don't normally have a negative effect on human health have a leg up in forming infections among astronauts in space. To better study the effects of spaceflight on bacteria, NASA sent microbes that typically cause treatable infections on Earth to space with the Atlantis missions in 2010 and 2011. The group found that communities of these bacteria were able to form in ways they didn't on Earth, giving researchers insight into how to improve health outcomes for astronauts in space, in addition to people on Earth.