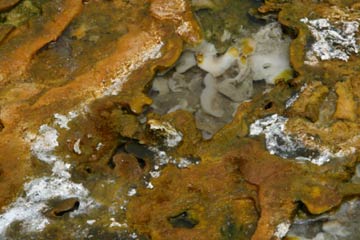 The transition from a free-moving microorganism to an immobile one is what makes biofilms unique in comparison to cells growing in a test tube. But how can microorganisms stick to a surface long term?

First, you'll need to know that once a free-floating cell starts a biofilm or becomes part of an existing one, it uses different genes to create proteins and other substances that will help it adapt to its new lifestyle. Switching genes "off" and "on" can result in the cell changing its behavior. For instance, some genes control whether a microbe such as a bacterium can move on its own, while others can command the cell to go into a dormant state if conditions are harsh. It's similar to the genes that allow us to digest the enzymes in milk as infants, but can be switched "off" after the weaning period, as seen in individuals with degrees of lactose intolerance [source: Bowen].

Regardless of species, all biofilms contain extracellular polysaccharide substances, also called EPSs [source: Lemon et al.]. The term may sound complicated, but just think of EPS as part of a sticky matrix of sugars, proteins and other genetic material released from cells in a biofilm. EPSs not only help hold the cells of a biofilm together, they play a significant role in protecting the colony. In most cases, EPSs make up the majority of a biofilm's mass [source: Christenson and Characklis].

After latching on to a surface, a cell will produce a sticky matrix with EPSs to root itself better and make it easy for other cells to join the colony. Once other cells stick to the matrix and decide to stay, they produce an adhesive matrix as well.

Before you know it, microbes in the biofilm have created elaborate, three-dimensional structures that resemble gluey towers when viewed under a microscope. While some biofilms have only a few cells in them, others can have millions -- and sometimes billions -- of cells intertwined in a single biofilm slime. But as we'll note later, biofilm growth can be slowed or stopped sometimes, mostly by competition among cells and environmental factors [source: Sturman].

Interestingly, communal life also makes it easier for cells to send signals to one another through a method called quorum sensing. This activity helps cells pass information about their neighbors and surrounding environment to one another. Quorum sensing is known to cause changes of behavior in cells and may provide insight into why cells decide to detach from biofilms; however, the meanings of these signals are not fully understood yet by scientists [source: Donlan].

Can the concept of strength in numbers be applied to biofilms? Read about how biofilms are micro-cities of their own on the next page.