Browse the article Chloroplasts Are the Plant Cells That Manufacture Energy 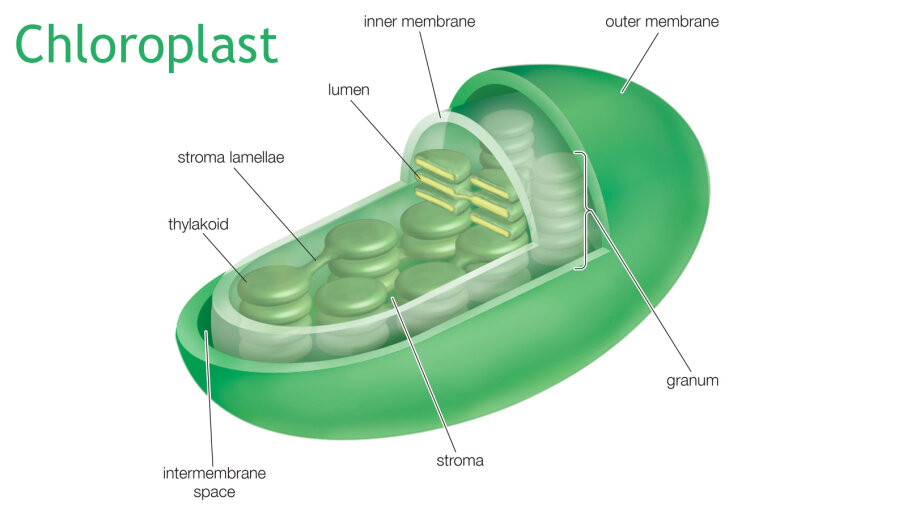 The structures of the chloroplast. Encyclopaedia Britannica/Getty Images

You know the sun, right? It's that giant ball of burning gas that emits so much energy that it powers every organism on Earth, starting with our green buddies, the plants. The sun gives off all manner of electromagnetic radiation, and plants use the energy that shows up in the form of visible light to accomplish the wild, magical-seeming process of photosynthesis.

Photosynthesis is not magical, however — it's just the cool chemical handiwork of these little cellular structures called chloroplasts, a type of organelle found only in plants and eukaryotic algae (eukaryotic means possessing a clearly defined nucleus) that captures sunlight and converts that energy into food for the plant.

Chloroplasts work a lot like mitochondria, another type of organelle found in eukaryotic cells responsible for energy production, which isn't surprising, since both evolved when a long-ago bacteria was enveloped — but not digested by! — a larger bacteria. It resulted in a kind of forced cooperation between two organisms that we now explain through a little something called the "endosymbiont hypothesis." Both chloroplasts and mitochondria reproduce independently from the rest of the cell and have their own DNA.

Chloroplasts can be found in any green part of the plant, and are basically a bag within a bag (which means there's a double membranes), which hold a lot of little tiny pouches (structures called thylakoids) containing a light-absorbing pigment called chlorophyll, suspended in some fluid (called stroma).

The key to a chloroplast's photosynthetic magic is in its membranes. Because a chloroplast started out long ago as an independent bacteria with its own cell membrane, these organelles have two cell membranes: The outer membrane is left over from the cell that enveloped the bacterium, and the inner membrane is the bacterium's original membrane. Think of the outer membrane as the wrapping paper on a present and the inner membrane as the box the toy came in originally. The most important space for photosynthesis is the one between the inside of the box and the toy — the thylakoids.

The double membrane of a chloroplast creates two dividers with four distinct spaces — the space outside the cell; the cytoplasm inside the cell; the stroma inside the chloroplast but outside of the thylakoid (aka the space between the inner and outer membranes, the wrapping paper and the box); and the thylakoid space — basically inside of the original bacterium. The thylakoids themselves are just little stacks of pouches covered in membranes — defined by their membranes, in fact. These membranes are dividers that don't let things just cruise between spaces, willy-nilly, allowing the chloroplast to stockpile electrically charged particles in certain areas and move them from one space to another through specific channels.

"That's how batteries work," says Brandon Jackson, associate professor in the Department of Biological and Environmental Sciences at Longwood University in Farmville, Virginia. "It takes energy to put a lot of negative electrons on one end of the battery, and a lot of positive charges on the other. If you connect the two ends with a wire, the electrons REALLY want to flow down to flatten the electro-chemical gradient between them. They want to flow so much, that if you put something along that wire like a light bulb, a motor or a computer chip, they will push their way through and make themselves useful as they move. If they don't do something useful, the movement will still release energy, but just as heat."

According to Jackson, in order to make a battery in a plant cell, there has to be an energy source and some dividers to create and maintain gradients. If the gradient is allowed to flatten, some of the energy that was used to create it escapes. So, in the case of the chloroplast battery, an electro-chemical gradient is created when the plant takes in the energy from the sun and the membranes covering the thylakoids act as dividers between different concentrations of hydrogen ions (protons) that have been ripped off some water molecules.

There's a lot of chemistry happening inside a chloroplast, but the result of the chemistry is the conversion of sunlight into stored energy — basically the creation of a battery.

The sun shines on a leaf. That solar energy excites electrons inside water molecules in the leaf, and because excited electrons bounce around a lot, the hydrogen and oxygen atoms in the water molecules break apart, launching these excited electrons into the first stage of photosynthesis — a conglomeration of enzymes, proteins and pigments called photosystem II, which breaks down water, producing hydrogen ions (protons that will be used in the battery and oxygen gas that will float off into the air as plant garbage).

These energized electrons get passed on to some other membrane-bound proteins that use that energy to power ion pumps that escort the hydrogen ions from the space between the membranes into the thylakoid space, which is where all the light-dependent reactions of photosynthesis occur. Photosystems and electron pumps cover the surfaces of the thylakoid membranes, pumping the hydrogen ions from the stroma (the fluid space between the thylakoid and the inner membrane) into the stacks and stacks of thylakoid pouches — and these ions really want to get out of these thylakoids, which is what creates the electrochemical gradient. In this way light energy — that stuff that shines on your face when you go outside — is converted into a sort of battery, like the ones that run your wireless earbuds.

At this point, photosystem I takes over, which arranges for temporary storage of the energy generated by the battery. Now that the electron has been allowed to move along the gradient, it's much more relaxed, so it absorbs some light to re-energize it, and passes that energy along to a special enzyme that uses it, the electron itself, and a spare proton to make NADPH, which is an energy-carrying molecule that provides short-term storage for chemical energy that will later be used to make glucose.

At this point, the light energy is now in two places: It's stored in the NADPH and as the electro-chemical gradient of the difference in hydrogen ion concentration inside the thylakoid compared to just outside it in the stroma.

"But the high hydrogen ion gradient inside the thylakoid wants to degrade — it needs to degrade," says Jackson. "Gradients represent 'organization' — essentially the opposite of entropy. And thermodynamics tells us that entropy will always try to increase, which means that a gradient must break down. So, the hydrogen ions inside each thylakoid really want to escape in order to even out the concentrations on either side of that inner membrane. But charged particles can't pass through a phospholipid bilayer just anywhere — they need some kind of channel to go through, just like electrons need a wire to make it from one side of the battery to the other."

So, just like you can put an electric motor on that wire, and make electrons drive a car, the channel the hydrogen ions pass through is a motor. These protons flow through the channel provided for them, like water flowing through a hydroelectric dam down an elevational gradient, and that motion makes enough energy to create a reaction that creates ATP, which is another short-term storage form of energy.

Now the original light energy has been converted into short-term storage chemical energy in the form of both NADPH and ATP, which will be useful later in the dark reactions (also known as the Calvin Cycle or the carbon-fixation cycle) within the chloroplast, all of which go down in the stroma because this fluid contains an enzyme that can convert NADPH, ATP and carbon dioxide into sugars that either feed the plant, assist in respiration, or are used to produce cellulose.

"Complex organic molecules like cellulose, which is made of glucose, take a lot of energy to make, and that all came from the sun," says Jackson. "Following the energy, it starts as light wave energy, then excited electron energy, then electrochemical gradient energy, then chemical energy in the form of NADPH and ATP. The oxygen gas is breathed off, and the NADPH and ATP aren't used to do other stuff within the cell — instead, both are passed to the carbon-fixation cycle, where other enzymes break them down, extract that energy, and use it to build glucose and other organic molecules."

And all this, thanks to a little organelle called a chloroplast.

Now That's Interesting
Because chlorophyll is great at absorbing red and blue light, but doesn't absorb green light, leaves appear green to our eyes because that's the color of light that bounces off of it.