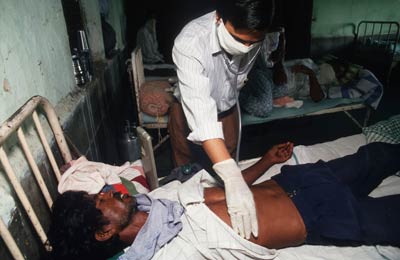 A victim of a pneumonic plague outbreak sits in a hospital in Surat, India on September 25, 1994.
Pablo Bartholomew/Getty Images

In addition to being virulent, plague is adaptable. It can live in the bodies of rodents, cats, fleas and humans. Plague can also cause different symptoms depending on how it enters a person's body. These abilities all come from the bacterium's DNA, which carries all the instructions it needs to multiply and make people sick.

Sometimes, plague-infected material enters the body through broken skin. For example, someone might touch infected blood while skinning a dead rodent. This can lead to septicemic plague, which does not always produce buboes. Plague bacteria and toxins in the blood overwhelm the body's immune defenses. This causes a high fever, abdominal pain and exhaustion. If left untreated, or if the immune system is irreparably damaged, septicemic plague leads to multiple organ failure and death. Septicemic plague can also occur as a complication of bubonic plague.

Pneumonic plague is the least common form of plague, but it's the one most likely to be used as a biological weapon. This is because pneumonic plague is highly contagious, highly lethal and easy to spread. In the past, other forms of plague have also been used as weapons. According to some accounts, the Black Death started after invading forces tossed plague-ridden bodies over the walls of a besieged city. The Japanese military also reportedly dropped bombs containing infected fleas over mainland China during World War II [source: CNN].

In addition to causing pneumonic and septicemic plague, Yersinia pestis can infect other parts of the body when it comes into contact with them. If blood carries plague to the cerebrospinal fluid that surrounds the brain and spinal cord, the result can be plague meningitis. Plague can also infect the tissues of the throat, causing plague pharyngitis.

Before the discovery of antibiotics, all of these forms of plague could be fatal. But today, prompt treatment, particularly in cases of bubonic plague, makes survival much more likely. In spite of these advances, plague still thrives in many parts of the world. Next, we'll take a look at why.