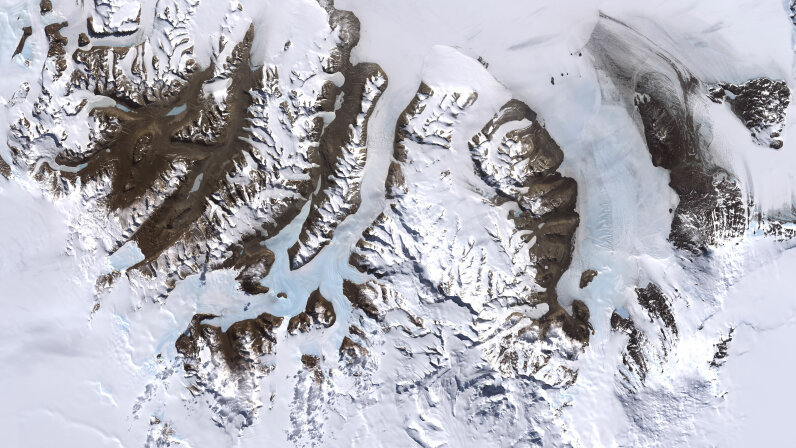 The McMurdo Dry Valleys are a row of valleys west of McMurdo Sound, Antarctica, so named because of their extremely low humidity and lack of snow and ice cover. Scientists consider the Dry Valleys to be the closest of any terrestrial environment to Mars. Robert Simmon/Getty Images

Life's resilience keeps astounding us. Unimaginable as it may seem, there's a thriving population of micro-orgnisms in the cold, dry, nutrient-poor soils of Antarctica. A study may have just revealed the secret to their survival — and that revelation could transform our quest to find life on other planets.

Antarctica is a continent which, famously, goes dark for months on end during the winter season, a period in which it sees no sunlight. This presents a big challenge to organisms who need to photosynthesize (i.e., convert solar light into food). Intense dryness is another hurdle. Certain parts of the continent receive no precipitation whatsoever. Also, even though Antarctica is covered in ice, drinkable water is scarce. And then we have the issue of carbon. All known life is based on this element, and yet very little of it can be found in Antarctic dirt.

Ah, but life goes on. For years now, biologists have known about the existence of diverse bacteria communities in Antarctica's soils. How can anything survive under such extreme conditions? To gain some insight, a team of Australian and New Zealander scientists took a hard look at microbe-filled dirt samples from two ice-free sites in eastern Antarctica. "Both areas are pristine polar deserts devoid of any vascular plants," explained Dr. Belinda Ferrari, a microbiologist at the University of New South-Wales, Sydney and senior study author, in a press release.

On Dec. 6, 2017, the team published their findings in the journal Nature. There, Ferrari and her colleagues reported seeing DNA traces from 23 microbial organisms inside those Antarctic soil samples. By reconstructing their genomes, the scientists learned that many of these life-forms had genes that make them exceptionally good at processing carbon monoxide and hydrogen. The researchers theorized that the organisms are able to meet their energy requirements by pulling both gasses — along with carbon dioxide — straight out of the atmosphere. In other words, because of Antarctica's shortage of sunlight and suitable water, as well as nutrient-poor soil, these microbes could be surviving off of air alone.

Should this be true, planets and moons that were once written off as completely uninhabitable might be able to sustain life after all. Maybe alien organisms don't need drinking water or abundant sunlight on their home worlds. Instead, it could be that the only thing they require is the right combination of atmospheric gases.

"This new understanding about how life can still exist in physically extreme and nutrient-starved environments like Antarctica opens up the possibility of atmospheric gases supporting life on other planets," adds Ferrari. But, the scientists say, more research is needed to see if this phenomenon exists in other parts of the world as well as outside of it.

Now That's Interesting
Antarctica's McMurdo Dry Valleys region has been compared to the surface of Mars. The place has received no rainfall in almost 2 million years, its humidity levels are staggeringly low, and ice, snow and liquid water are all practically nonexistent there.