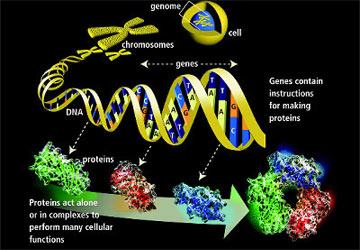 Here's a quick, visual breakdown showing how the proteins fit in with our genetic makeup.
Image courtesy U.S. Department of Energy Genome Programs

Proteins are responsible for numerous functions in the body, everything from converting food into energy to delivering chemical messages. Each protein's peculiar origami determines both its role and its ability to hook up with other molecules. It's as if a protein were a chain made up of a thousand locks, all bunched in a ball: If you wanted to design a drug to affect it, you would need to know which locks were turned outward, and in what pattern, so that you could cut a set of keys to fit them.

Particular proteins play pivotal parts in key chains of events. Researchers prize these proteins because they represent a vulnerability that they can exploit to slow or stop a disease, including retroviruses like HIV and MPMV. A retrovirus is a virus that carries its genetic information as ribonucleic acid (RNA) instead of DNA. These viruses transcribe their RNA into DNA, instead of vice versa, permanently enmeshing their genetic code into the infected cell's genome and transforming it into a factory for making more retrovirus.

Retroviruses rely on a protein catalyst called protease enzyme as part of their reproductive process. Inhibiting that protein throws a monkey wrench into a retrovirus' machinery of destruction. Indeed, such protease inhibitors are already used to treat HIV infection in AIDS patients [source: Britannica].

Unfortunately, teasing out the structure of such proteins is one of the most difficult puzzles we know of. Imagine filling a giant box with tangled Christmas tree lights, disused Slinky toys, barbed wire, duct tape and electromagnets, then shaking it and flipping it around, and finally trying to guess what shape you'd made. You've only begun to scratch the surface of the complexity of this task. Proteins can consist of more than 10,000 atoms apiece, forming chains, sub-chains and bonds in countless combinations; in fact, there are more ways to fold a protein than there are atoms in the universe [source: Bohannon].

Such complexity is more than even a supercomputer can sometimes handle, particularly because computers are not especially good at working with three-dimensional shapes. So, scientists started looking for a faster and more effective means to crack protein structures. Their solution? Use the innate spatial analysis abilities of the human brain. Foldit was born. Almost immediately, it began paying dividends.

In this next section, we'll take a closer look at how Foldit works, what gamers have accomplished with it and whether or not they cured HIV. 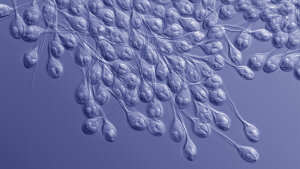