Are there evolutionary roots to human obesity? 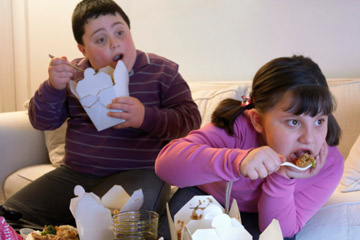 Are there evolutionary reasons for our eating habits?
Digital Vision/Thinkstock

In the United States, more than 72 million adults are obese; 16 percent of children qualify as well [source: CDC]. Obesity increases the likelihood of many life-threatening conditions, including diabetes, cancer and heart disease, so there's been plenty of speculation about what's to blame for these rampantly growing rates of obesity. This era of obesity began in the 1980s, but is it possible that we need to go further back through our evolutionary past to determine what's going on?

Humans are distinguished from other species by the size of their brains, but bigger brains don't come free. A growing brain requires nutrient-rich, energy-packed food, so rather than foraging for fruits and vegetables, our human ancestors began eating meat. Meat was the perfect combination of protein, vitamins and fatty acids needed for brain growth, but due to a stunning lack of steakhouses, early humans had to track, kill and prepare the wild game themselves. This labor-intensive process meant that humans needed lots of food not only to support their growing brains, but also to fuel their bodies for the task of hunting.

Very few people rely exclusively on hunting for their nutritional needs anymore; thanks to our big brains, we humans have figured out ways to make food easily accessible 24 hours a day. We move around much less, and our food has become much less nutritious than those early meals of our ancestors. This drop in nutrition is largely due to the development of agriculture 10,000 years ago. Instead of eating protein-rich meat, our ancestors began eating grains, which have far fewer vitamins and minerals. Our ancestors also began domesticating and breeding animals for food, but the result was more fat in our diet: Wild game has only 4 percent of fat, whereas supermarket beef has about 36 percent [source: Bjerklie, Lemonick].

While the nutritional quality of our food and our activity levels have both decreased over time, our bodies may still behave like those of our ancestors. There were times throughout history when the ability to store fat was an important survival tool. Early humans had to endure famines and shortages of food, so their bodies were equipped to survive long periods without eating. Researchers believe these people possessed what's known as a "thrifty gene," which helped their bodies store fat for endurance. Since the ability to outlast a famine would have been a useful skill, evolution would have favored those who possessed this gene, and it would have been passed down to humans living today.

For many people in the developed world, food is rarely in short supply, so we eat more often. If that thrifty gene is present, though, the body holds onto that food as fat, even if the person has no risk of starving. And it's only in recent years, when humans started living much longer, that we've realized just how many health problems wait down the line for someone with the inability to get rid of excess fat. Whether humans will continue to evolve and rid themselves of the thrifty gene remains to be seen.

10 Ways We're Using Data to Fight Disease
The Manchineel, or 'Death Apple,' Is the World's Most Dangerous Tree
What is collective hysteria?