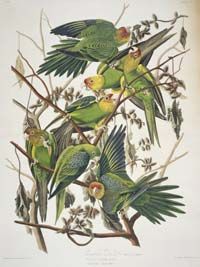 If you think of parrots as birds that live in lush, tropical jungles, you may be surprised to learn that the United States used to have its own native parrot. The Carolina parakeet lived in the American southeast until the early 20th century. These brightly colored, noisy birds were a nuisance. They ate fruits, vegetables and grains, and they traveled in large, noisy, crop-destroying flocks. This made them a favorite target of hunters, who wanted to protect the food supply and sell the birds' vivid feathers. If you want to see a Carolina parakeet today, you have to look for it in illustrations or stuffed museum displays -- it has died out completely due to hunting and habitat loss and was declared extinct in 1939.

Hundreds of years passed between the influx of European settlers on the coasts of North America and the extinction of the Carolina parakeet. But not all modern extinctions have been so slow in coming. Arctic explorers first made note of Stellar's sea cow, which looked like an extra large, wrinkly manatee, in 1741. By 1768, less than 30 years later, excessive hunting led to the sea cow's extinction.

These are just two of the life forms that have died out since mankind started keeping records. But today's research suggests that these extinctions may be part of a bigger trend -- a human-caused mass extinction that could rival prehistoric events that destroyed most life on Earth. The most famous of these was the mass extinction that killed the dinosaurs, although other events were far more devastating.

Whether they're big or small, extinctions change the world. And while extinctions themselves are all about change, the study of extinction is all about uncertainty. Anything that lives can become extinct, but how do scientists know when it happens? How is it possible to figure out how quickly species are disappearing when no one really knows how many species live on Earth in the first place? This article will delve into what happens when species disappear, from dinosaurs to dodos, and explore the question of how new life can arise from widespread extinction. 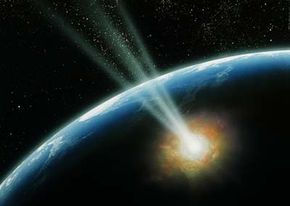 While asteroid collisions have probably been behind at least one major mass extinction, most extinctions happen on a much smaller scale.
Kauko Helavuo/The Image Bank/Getty Images

It's easy to think of extinction as a big, dramatic event, the product of an asteroid collision or the invasion of new, aggressive species. But extinctions happen even without the aid of natural disasters or widespread slaughter. Researchers estimate that between 1 and 4 billion species have lived on Earth during its history. All but about 50 million of those are gone today. Less than a third of those billions of extinct life forms died out during mass extinctions [source: Newman].

You'll notice that these are all averages and approximations. That isn't just because they involve large numbers and long time spans. These numbers are approximate because of several unavoidable difficulties that are part of studying extinction:

Because of all this, a lot of the study of extinction can seem like it has more to do with math than with real, living beings. Researchers use the number of known fossils to estimate the number of species that have ever existed. They use estimates called confidence intervals to analyze how likely it is that a particular species became extinct at a particular time. And they use equations and algorithms to try to make up for the holes in the available data and to make accurate predictions of how, when and why species have become extinct.

Researchers can also apply mathematical analysis to the plants, animals and microscopic organisms that are alive today. For example, with math, researchers can estimate how many of a particular plant or animal are alive on the planet. Math also helps researchers figure out a species' minimum viable population, or the point at which it's sure to become extinct, even though there are a few left. All of this mathematical work can help scientists figure out whether a single species is endangered and how to help protect it.

But extinction isn't all about math. In the next two sections, we'll look at the practical aspects of extinction on large and small scales. You'll find out about the world's most devastating mass extinction. You'll also learn why a butterfly, regardless of whether it can create a storm with the flapping of its wings, can cause the extinction of numerous other species if it disappears.

The Extinction of a Species 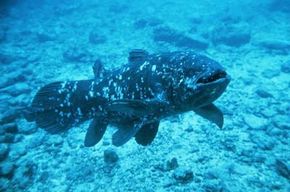 The coelacanth is a Lazarus species. Scientists thought it became extinct millions of years ago, but living specimens reappeared in 1938.
Peter Scoones/Taxi/Getty Images

Every once in a while, a species that hasn't gone extinct will disappear from the fossil record. Sometimes, this is because a life form has evolved into a new species -- this is known as pseudoextinction. Life forms can also disappear from the fossil record and reappear later. These Lazarus species may have experienced a dip in population, or they may not have died in conditions that lead to fossilization.

But most of the time, when a species disappears from the fossil record -- or from the face of the planet today -- it's because it's on its way to extinction. Typically, these small-scale extinctions happen because of some kind of change in the environment where a life form lives. While some species can adapt to the changes, others die, and if enough die, the species becomes extinct. These are some of the biggest factors in the extinctions of particular species:

The loss of one species can also lead to the loss of many others. For example, flowering plants rely on pollinators, like bees and butterflies, to reproduce. If the pollinators disappear, the flowering plants can die, too. The same is true with changes in the food chain. If an animal relies on a specific plant for food and that plant becomes extinct, the animal will soon follow unless it's able to change its diet. A good example is the extinctions that happened at the end of the last ice age, about 11,000 years ago. Small mammals began to go extinct, probably because of climate change and changes in geography. This caused the extinction of bigger animals, like saber-tooth cats, which lost their food source.

Typically, little changes like this happen all over the world all the time, leading to the extinction of a few interrelated species. But sometimes the stress on an ecosystem is so large that not many life forms survive. Next, we'll look at some of the world's biggest extinctions.

When Extinction Is a Good Thing

Although most environmentalists view extinction as a threat to life on the planet, a few extinctions are generally regarded as good. One example is the eradication of the smallpox virus. Smallpox was a life-threatening illness in most of the world until vaccines stopped its spread. In 1980, the World Health Organization declared that the smallpox virus was extinct, although a few samples of the virus still exist in laboratories today. 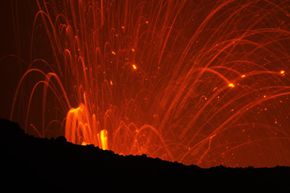 Volcanoes have been blamed for past mass extinctions.
Frank Krahmer/Photodisc/Getty Images

It's easy to think of mass extinctions as events that suddenly, instantly destroy most life on Earth. In reality, most mass extinctions take place over millions of years. Lots of plants, animals and microscopic organisms gradually die as a result of a massive stress on the ecosystem. This eventually leads to the extinction of many life forms.

When studying these extinctions, researchers look at life forms in groups using scientific classifications. These classifications organize life forms according to traits they have in common. From biggest to smallest, these groups are domain, kingdom, phylum, class, order, family, genus and species. Researchers usually examine how mass extinctions affected families and genera to determine the extent of the extinction.

In each of these mass extinctions, some type of event placed extreme stress on the world's ecosystems. Large groups of animals died, making room for new life. After each mass extinction, new species arose. Survivors of the extinction also thrived, taking advantage of the newly available room and resources. It's because of these extinctions that life on Earth looks like it does today.

However, the Earth might not look this way for long. Next, we'll look at how extinctions are affecting the world today and whether humans are the cause of a sixth major mass extinction.

Mass extinctions mark major divisions in the geological time scale, which is the history of the Earth as recorded in the layer of rocks that make up its crust. Geologists and paleontologists use this scale to study everything from rock formations to fossils. 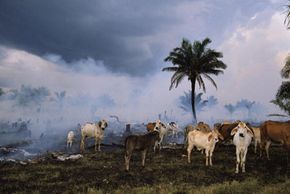 Based on analysis of the fossil record, researchers estimate that most species on Earth have an overall life span of about 10 million years. It's an ongoing cycle of plants, animals and microscopic organisms appearing in the fossil record, remaining for about 10 million years and disappearing. Most likely, this is the natural state of life on Earth, regardless of exactly what species are alive.

However, live forms are dying out much faster today than they appear to at any point in the fossil record. As we discussed earlier, the background rate of extinction is somewhere between one and five species per year. But today, the extinction rate appears to be anywhere from 100 to 1,000 times greater than that [source: Holsinger]. Exact numbers are hard to pin down. No one knows exactly how many species are alive on Earth today. On top of that, it can be difficult to impossible to determine whether a plant or animal has died out. Even after exhaustive searches, researchers have declared some animals extinct only to find new specimens later.

The major cause of these extinctions isn't global warming or acid rain -- it's habitat loss. As the human population grows and more of the planet becomes industrialized, natural habitats for plants and animals disappear. As species that lived in these habitats die, the level of biodiversity decreases. The loss of plant and animal species can lead to everything from food shortages to poor soil quality. The loss of microscopic organisms can also play a role. For example, one theory about the Permian-Triassic extinction is that helpful marine bacteria became extinct, and the bacteria that flourished as a result produced hydrogen sulphide and caused acid rain.

Human behavior is also causing other ecosystem stresses, such as pollution, which could threaten species with extinction. Global changes,such as global warming, play a role in extinction as well. In theory, addressing these issues might slow the rate of extinction, but it's unclear how long it might take animal and plant populations to return to normal.

There's no worldwide body responsible for determining which life forms are extinct and which aren't. Often, the declaration that a species has become extinct comes after an exhaustive physical search by a particular research team. However, several groups track the conservation status of plants and animals. These groups rank animals according to whether they're threatened, endangered or apparently safe. One is the International Union for Conservation of Nature and Natural Resources (IUCN), which maintains the Red List of Threatened Species. On the 2007 red list, 16,306 species are listed as threatened with extinction. 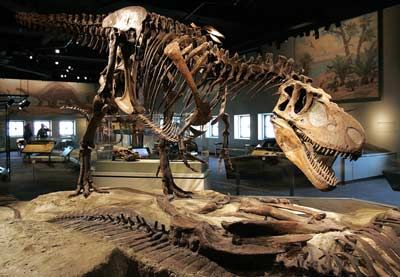 Up Next
How Dinosaurs Work
Explore More 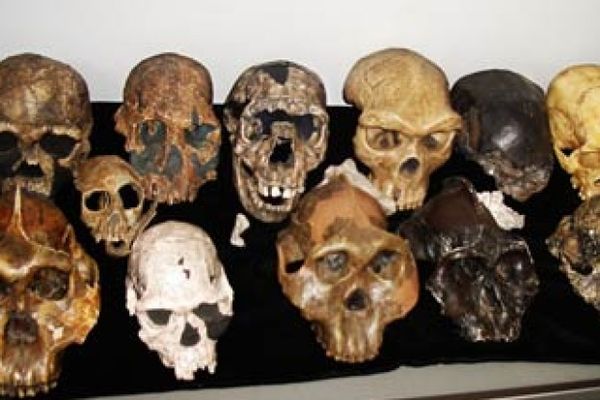