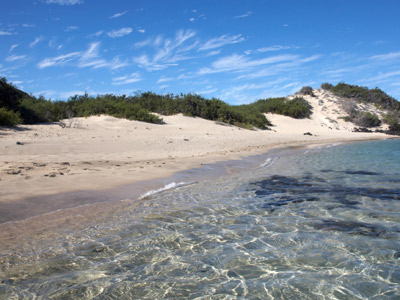 Tourism brings in a lot of money for Ecuador but could threaten the islands' resources.
­iStockphoto.com/tirc83

­The islands are also home to a small population of people. There are no known aboriginal tribes of the Galapagos. When people from the Ecuadorian mainland began moving to the Galapagos Islands, it was at a very slow rate. While the human population on the archipelago numbered as few as 1,500 in 1955, the modern-day population has swelled more than 19,000 residents as of 2006 [source: Galapagos Conservation Trust].

Tourism is big business on the islands, and the 160,000 tourists who visit the Galapagos to see its natural wonders produce $100 million in annual revenue for Ecuador [source: Telegraph and Inter-American Development Bank]. Coffee and cattle are the area's biggest exports. Work on the islands offers high salaries, up to 50 percent higher than those on the mainland. Although the Ecuadorian government tries to contain the islands' population growth, jobs are hard to resist in a country with a 40 percent unemployment rate [source: Galapagos Online].

The human impact -- both the growing rate of permanent residency and tourism -- poses a threat to the islands' ecosystems and availability of resources and services. Additionally, overfishing and the introduction of non-native species are causing environmental problems on the islands. An unsustainable rise in legal and illegal commercial fishing of sea cucumbers, shark fins and lobsters threatens marine ecosystems.

Non-native species introduced to the islands -- whether today when a plane touches down or hundreds of years ago when explorers landed -- compete with endemic wildlife for food. Take goats, for instance. A handful of goats were brought to Santiago Island in the 1800s and are now estimated to number close to 100,000. The Galapagos goat population feeds on native vegetation and competes with the giant tortoises for food, literally eating some species into extinction.

Since tourism began on the Galapagos in the 1960s, conservation efforts have been established on the islands. The Charles Darwin Foundation, a nonprofit organization focused on scientific research and conservation, is an active presence. Additionally, the Ecuadorian government established 90 percent of the archipelago as a wildlife preserve, the Galapagos National Park and Galapagos Marine Reserve.

­Under a new law, the Special Regime for the Galapagos, the government is attempting to limit migration, control development and protect native species and ecosystems. Yet despite conservation efforts, the World Heritage Committee added Galapagos to UNESCO's List of World Heritage Sites in Danger in 2007.