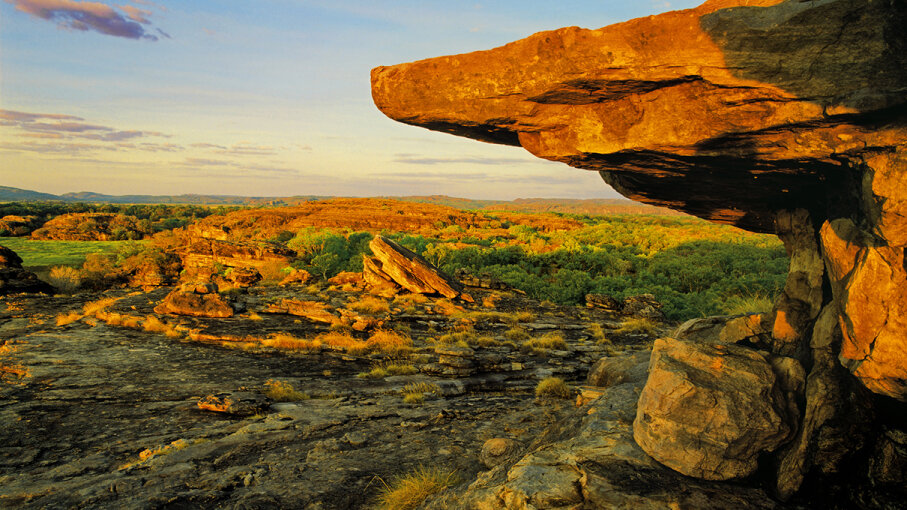 A group of rocks in Kakadu National Park is known as Ubirr; designated a World Heritage Area, the geographic feature is home to significant early Aboriginal Australian rock art paintings dating back to 40,000 B.C.E. A nearby archaeological dig has discovered new evidence in the study of mankind's arrival to the continent. Australian Scenics/Getty Images

Hundreds of thousands of years ago, a new species emerged in Africa. Homo sapiens wasn't especially big or powerful compared to other animals, but it had one big evolutionary advantage: a thin-walled, high-vaulted skull and a flat, almost vertical forehead, all housing a really big brain. Nevertheless, the human race struggled to survive, and during a prolonged cold snap that made it difficult to find food, humanity's numbers may have dropped to as few as 10,000 — considerably less than it takes to fill most sports arenas today.

But then, around 100,000 years ago, the climate started to improve, and a growing human population felt brave enough to start venturing increasingly farther away from their ancestral home in search of food. Eventually, they spread all over the planet, even reaching places such as the island continent of Australia.

A team of anthropologists excavates the lowest reaches of a pit at the Madjedbebe dig.
Dominic O'Brien/Gundjeihmi Aboriginal Corporation

Scientists have theorized that humans reached the land down under somewhere between 47,000 and 60,000 years ago. But now, an international team of researchers has discovered and dated about 11,000 ancient artifacts found in Kakadu National Park, in Australia's Northern Territory. The archaeological items, including axes and grinding stones, indicate humans arrived about 65,000 years ago — between 5,000 and 18,000 years earlier than previously believed. Some artifacts, found buried in about 8.5 feet (2.6 meters) of sand, were identified as being potentially 80,000 years old. The findings are published in an article in the journal Nature.

The new, revised arrival date is significant, because it could call into question other scientists' assertion that ancient humans caused the extinction of Australia's strange and wonderful megafauna — giant kangaroos, wombats and tortoises, among others — around 45,000 years ago.

"Previously it was thought that humans arrived and hunted them out or disturbed their habits, leading to extinction, but these dates confirm that people arrived so far before that they wouldn't be the central cause of the death of megafauna," said anthropologist Ben Marwick in a University of Washington press release. "It shifts the idea of humans charging into the landscape and killing off the megafauna. It moves toward a vision of humans moving in and coexisting, which is quite a different view of human evolution."

This new research from the dig site at Madjedbebe, on the traditional lands of the Mirrar people, adds to a growing amount of research on humanity's arrival in Australia. DNA testing research published in 2011, relying on data obtained from a 90-year-old hair sample of an Aboriginal Australian man, even suggests that the continent could have been settled as far back as 70,000 years ago.

Now That's Interesting
The researchers used both radiocarbon dating and a technique called optical stimulated luminescence (OSL),which can determine the most recent time a grain of sand was exposed to sunlight.