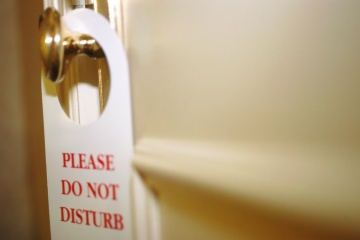 Don't let that distinctly human hotel sign fool you. Humans are just one of many animals that require at least a modicum of privacy.
John Foxx/Stockbyte/Thinkstock

It is strange to think that at some point -- in a fit of nostalgia -- our descendants will surf archived Facebook pages for pictures of great-grandmother drinking Busch Ice at a fraternity party and learn that she "liked" Olive Garden.

There's little doubt that our concept of privacy has evolved and will continue to. We're increasingly willing to share our passionate love of needlepoint with our neighbors and to blog about it to total strangers. (And it wouldn't hurt if those page views attracted advertisers, too.) But most of us still value a little bit of isolationism when it comes to society knowing everything about us. Sure, we might want to present an idea of ourselves to the public -- but do we honestly want the public to know who we really are?

It used to be a nearly moral obligation to adhere to a strict policy of privacy. In the Victorian era, the "personal" became taboo; the gilded presentation of yourself and family was critical to social standing. Women were responsible for outward piety and purity, men had to exert control over inner desires and urges, and everyone was responsible for keeping up appearances [source: Smith].

Even the design of the home began to change. Dumbwaiters were invented so the servants couldn't interrupt the "private" life of the family, whereas previously the appearance of a large wait staff had social cache [source: Design243]. Swinging back on the pendulum, the "private life" of the 21st century now takes place online, where we update friends and strangers on Facebook with our political views, we post pictures of our dinner to Instagram, and we share the music we're listening to right this second on Spotify.

Clearly, there's been a shift. But as we see from the international uproar over the U.S. PRISM program and other government surveillance, we still have the desire to keep some information to ourselves.

Does privacy have a biological or evolutionary basis that actually serves a purpose, either to protect or even edify us? Keep in mind that we're just one of many animals to pursue privacy. Birds, for instance, don't just sing to gossip with their feathered neighbors or because they're so full of cheerful tidings. Their song is often meant to mark their territory, indicating that they would like a wide berth, thanks very much [source: Klopfer and Rubenstein]. In fact, it's a rare organism (think social insects like ants) indeed that doesn't need a little me time [source: Klopfer and Rubenstein].

Before we dive into reasons that privacy may have developed in humans, let's speak for a moment about what "privacy" really means. When we talk about the concept in relation to, say, the U.S. National Security Agency reading our e-mails, we're concerned with information that may reveal something about us or our activities. But remember that privacy can also mean isolation; being alone or unobserved, for instance.

On the latter point, there certainly seems to be a biological basis for why humans wouldn't always want to be surrounded by one another. Think about animals who want to keep competitors out during breeding season. They're demanding privacy just like (most) humans do when it comes time to mate. We assume our need to not broadcast our sexual activities has to do with "privacy," when, in fact, it may have developed as a necessary practice to make sure there wasn't an unwelcome rival infringing on our own mating ritual.

But what about privacy when it isn't necessarily about isolation? Why do we value keeping some things close to the vest? Competitive advantage is one potential reason. Back in the day, perhaps this meant not sharing that we found a sweet supply of nonpoisonous berries. Withholding that information might give us a few more needed calories than our neighbor.

We can also view privacy as a way to achieve goals. By keeping some information to ourselves, we might be less of a target for others to try to usurp a position we've gained or are trying to gain. Think this sounds crazy? Consider that for many years, it wasn't unheard of for working mothers climbing a corporate ladder to avoid talking about their children in the office. They assumed -- rightly or wrongly -- that the perception of them as a parent would overshadow their goals as an employee.

So when you're wondering if the government is reading your steamy texts, be assured you're just reacting to the biological need to protect your territory and mate. Or something like that.

I'm all for a modicum of privacy. I never before thought of it as a biological need that evolved, of course; I just assumed that it made me feel "safer" to protect some information. But when we look at what feels "safe," there just might be a biological basis for our caution.

Can you catch a sneeze like you can a yawn?
Is there such a thing as a truly unselfish act?
Creating Superhumans Through Gene Manipulation and More