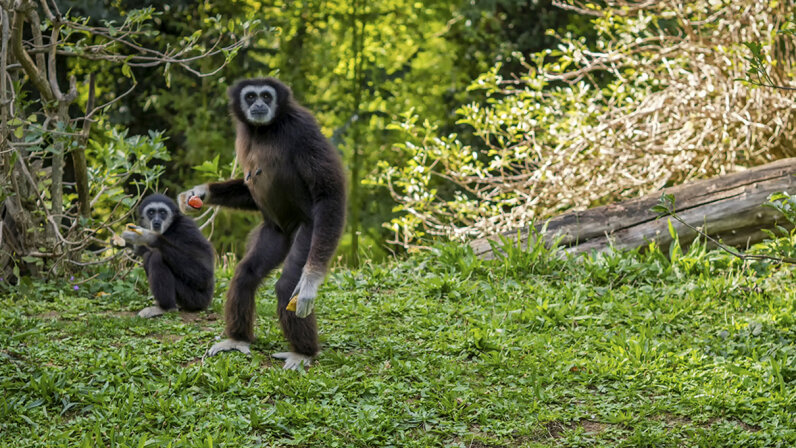 A pair of lar gibbons (Hylobates lar), also known as the white-handed gibbons, enjoys a snack. New research suggests the last common ancestor of all apes may have been about the size of a modern-day gibbon. Louise LeGresley/Getty Images

We want to understand where we come from, but all we humans know for scientific fact is that we are primates like apes, monkeys and lemurs, and that our ancestor species inched their way over millions of years along some labyrinthine evolutionary trail that is now largely obscured by time. We may never know every hairpin turn of that path, but that doesn't keep us from trying.

So we chip away at the available evidence to find out as much as possible about our hominid and hominin ancestors, from diet to movement to social organization to ecological niche. And one thing that affects these, and scores of other elements of an animal's ecology and biology, is body mass. A new study published in the journal Nature Communications suggests that the last common ancestor (LCA) between all modern apes — including humans and great apes like chimpanzees — was an animal no bigger than a modern-day gibbon.

This chart shows the current scientific understanding of ape and human lineage.
University of Tübingen

"Body size directly affects how an animal relates to its environment, and no trait has a wider range of biological implications," said lead author Mark Grabowski, who conducted the work as a postdoctoral fellow in the American Museum of Natural History's Division of Anthropology, in a press release. "However, little is known about the size of the last common ancestor of humans and all living apes. This omission is startling because numerous paleobiological hypotheses depend on body size estimates at and prior to the root of our lineage."

Nobody's sure exactly when this split between the hominid ancestors happened, but it was probably during the Miocene, between 23 million and 5 million years ago. The fervent pipe dream of every paleobiologist is that we will one day find fossil evidence of the LCA, or the fabled "Missing Link," that will explain everything about how we got to be this way.

But in order to estimate the body mass of the LCA without the holy grail of fossils, these researchers used the stats of modern apes and the fossils we do have from Miocene primate species from Africa, Europe and Asia to piece together a rough courtroom sketch of the animal. They came to the conclusion that the LCA probably weighed around 12 pounds (5.4 kilograms).

Considering researchers have most recently worked under the assumption that the LCA probably weighed around the same as a modern chimpanzee — 100 pounds (45 kilograms) — this study could vastly change the way we think of the evolutionary history of our species. For instance, the LCA might not have just climbed trees as modern chimpanzees do, they could have swung from trees with the overhand motion of a modern gibbon, which would have helped provide access to hard-to-get food. The predilection toward bigger bodies might have evolved later, then, to help our ape ancestors contend with a growing number of monkey competitors.

"There appears to be a decrease in overall body size within our lineage, rather than size simply staying the same or getting bigger with time, which goes against how we generally think about evolution," Grabowski said.

Now That's Interesting
The study also concluded that many of our early human relatives, from Australopithecus to Homo erectus, were probably smaller than their ancestors.