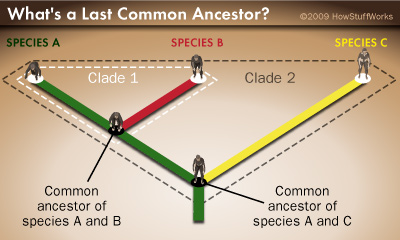 If you suddenly find yourself in the company of paleoanthropologists or swamped by news of the latest hominid fossil find, there's a good chance you'll hear the phrase last common ancestor (LCA). In some circles, they throw the term around like it's the Holy Grail or a winning lotto number. What is this enigmatic person or thing?

The answer comes down to evolution and the way we plot its course through varying species. But let's take a step back from the quagmire of natural selection for a moment and tackle this completely made-up concept: last common teacher.

Think back to someone you went to school with for a period of time -- maybe a childhood friend or even a college chum. You shared this teacher, that teacher -- but what was the last teacher you both studied under before your scholastic paths or lives veered in different directions? The answer would be you and your classmate's last common teacher.

With evolution, it's much the same situation, only without the Facebook reunions and stilted conversations a decade later. When scientists study fossils and plot the course of evolution from species to species, they see linear progressions where one form of life became another, but they also see situations where one species branched into two or more. Some of these resulting forms went extinct, while others adapted into yet newer forms or remained as is.

To apply this back to schooling, you might find that you have a whole lot more in common with the friend you shared a last common college teacher with than a last common second-grade teacher.

But what does an LCA mean for human evolution? Read the next page to find out. 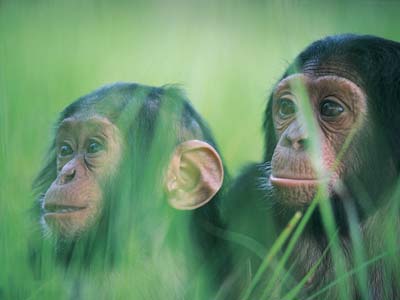 Every living creature on Earth shares last common ancestors with those beings around it. You and your pet share one, regardless if you happen to own a cat, dog, scorpion or sea monkey. In fact, biologists theorize that all life descended from a universal common ancestor, the font from which our biodiversity flows.

As far as paleoanthropologists go, the focus is much narrower. Paleoanthropology concerns not just the hunt for human ancestors, but the study of the biological and technical origins of evolution [source: Middle Awash Project]. For paleoanthropologists, the Holy Grail of last common ancestors is the one we share with chimpanzees, our closest living relative.

Based on current fossil evidence, paleoanthropologists think the panin and hominid lines diverged roughly 5.4 million years ago. The panin line continued on to the modern chimpanzee, and the hominid line evolved through a number of forms until modern humans emerged on the scene. Various environmental and dietary demands altered their behaviors and molded them into their current genetic forms.

Currently, the exact nature of the human/chimp last common ancestor (LCA) remains a mystery. Until we discover compelling fossil evidence, all we can do is extrapolate based on the DNA of both species as they exist today. We can also examine fossil evidence of species that existed before and after the great split. It's like those computer exercises where they morph a husband and wife's faces to determine what their offspring will look like. In fact, researchers at the United Kingdom's Hull York Medical School used just this sort of technology to theorize what the face of the LCA might have looked like. Of course, a great deal more went into this project than goes into the "If They Mated" bit on Conan O'Brien, such as major evolutionary trends and the underlying skull and musculature.

Without the fossil evidence, however, the LCA of chimps and humans will have to remain a dot on a clade and a phantom face on a computer screen.

Explore the links on the next page to learn even more about human evolution. 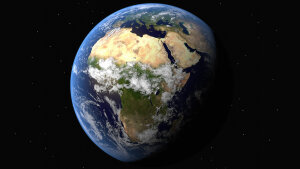