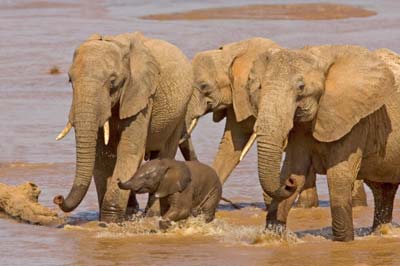 We usually think of evolution as something we don't see happening right before our eyes, instead looking at fossils to find evidence of it happening in the past. In fact, evolution under intense population pressure happens so fast that we've seen it occur within the span of a human lifetime.

African elephants typically have large tusks. The ivory in the tusks is highly valued by some people, so hunters have hunted and killed elephants to tear out their tusks and sell them (usually illegally) for decades. Some African elephants have a rare trait -- they never develop tusks at all. In 1930, about 1 percent of all elephants had no tusks. The ivory hunters didn't bother killing them because there was no ivory to recover. Meanwhile, elephants with tusks were killed off by the hundreds, many of them before they ever had a chance to reproduce.

The alleles for "no tusks" were passed along over just a few generations. The result: As many as 38 percent of the elephants in some modern populations have no tusks [source: BBC News]. Unfortunately, this isn't really a happy ending for the elephants, since their tusks are used for digging and defense.

The bollworm, a pest that eats and damages cotton crops, has shown that natural selection can act even faster than scientists can genetically engineer something. Some cotton crops have been genetically modified to produce a toxin that's harmful to most bollworms. A small number of bollworms had a mutation that gave them immunity to the toxin. They ate the cotton and lived, while all non-immune bollworms died. The intense population pressure has produced broad immunity to the toxin in the entire species within the span of just a few years [source: EurekAlert].

Some species of clover developed a mutation that caused the poison cyanide to form in the plant's cells. This gave the clover a bitter taste, making it less likely to be eaten. However, when the temperature drops below freezing, some cells rupture, releasing the cyanide into the plant's tissues and killing the plant. In warm climates, natural selection acted in favor of the cyanide-producing clover, but where the winters are cold, non-cyanide clover was favored. Each kind exists almost exclusively in each climate area [source: Purves].

What about humans? Are we subject to natural selection as well? It's certain that we were -- humans only became humans because an assortment of traits (larger brains, walking upright) conferred advantages to those primates that developed them. But we're capable of influencing the distribution of our genes directly. We can use birth control, so that those of who are "fittest" in terms of natural selection might not pass on our genes at all. We use medicine and science to allow many people to live (and reproduce) who otherwise wouldn't likely survive past childhood. Much like domesticated animals, which we breed to specifically favor certain traits, humans are influenced by a sort of unnatural selection.

However, we're still evolving. Some humans have more reproductive success than others, and the factors that affect that equation have added a layer of human complexity on top of the already complicated interactions of the animal world. In other words, we don't really know what we're going to evolve into. Change is inevitable, but remember that natural selection doesn't care about making "better" humans, just more of us.

If you want to learn more about natural selection, evolution and topics like migration and population, please see the next page.