The Trouble with the Tree of Life 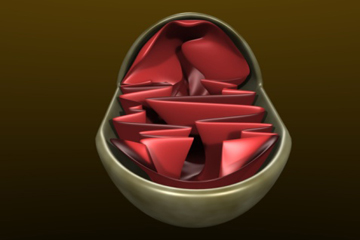 A digital representation of a cutaway of a mitochondrium.
Hemera/Thinkstock

The genetic comparison of organisms provided by phylogeny has revealed a serious obstacle to tracing the tree of life back to the single common ancestor that earlier biologists couldn't see. The hunt for the common ancestor -- and the very idea that one existed -- is based on genetic distribution via vertical gene transfer. Through this, genes are passed along from one generation to the next through sexual or asexual reproduction. Either one or two organisms give rise to another that inherits a replica of itself or a predictable combination of their genes. Over time, organisms may eventually diverge into entirely different species or even kingdoms, like humans from apes (or, even further back, where the lineage that gave rise to birds diverged from that of bacteria), but this horizontal transfer of genes still leaves a trail of genetic bread crumbs we can follow to trace our origins.

That genes were only transferred vertically was the predominant view of scientists until the 1950s when another type of gene transfer was discovered. Horizontal or lateral gene transfer is another means of one organism obtaining another's genes, but rather than parent to offspring, this method of genetic distribution is based on one organism effectively absorbing another organism's DNA whole and intact [source: Wade]. Two organisms can create a third, seemingly unrelated hybrid organism with both genes, but not in any way similar to the equal combining of genes that occurs during reproduction. Instead, one larger organism can virtually eat another organism and retain the second organism's genetic code, using the first organism's code for itself. The mitochondria, the part of the cell responsible for converting sugars to the energy used to power cellular functions in eukaryotic animals, is thought to have once existed as an independent organism [source: Wade]. Through lateral transfer, an ancient eukaryote absorbed it and retained its genetic make-up.

Early in Earth's history, microbiologists now believe lateral transfer was common, giving the roots of the tree of life not a direct line upward from a single seed, but rather a series of impossibly criss-crossed, virtually untraceable lines among single-celled organisms. The search for a single common ancestor was dealt another blow after research showed extremophiles, organisms capable of surviving in harsh conditions and candidates for the earliest life forms on Earth, likely evolved from other bacteria and later adapted to their environments [source: Zimmer]. This suggests they are less ancient than previously thought.

But whether we evolved from a single common ancestor or many, the question remains, how did life on Earth begin? We get closer to the answer on the next page.