How well do people really know themselves?

Browse the article How well do people really know themselves? 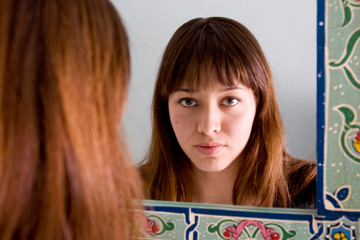 Does a mirror reflect what you think is there?
©iStockphoto/Thinkstock

"It is as hard to see one's self as to look backwards without turning around," wrote Henry David Thoreau. That may seem like an odd quote from someone who's known for living alone in the woods. Didn't Thoreau have plenty of time in his solitary pursuits to see himself? Couldn't he spend entire days figuring out how he felt about important issues and exploring his emotions?

"Know thyself" has been a dictate since the time of the ancient Greeks, but Thoreau's statement speaks to the difficulty of such a task. As it turns out, there are some things about ourselves that are very hard to perceive accurately. In some instances, others know us better than we know ourselves.

People have a pretty good handle on their emotions and thoughts. They know when they're nervous in front of crowds, even if they've found ways to disguise their anxiety. They know what makes them sad and what makes them happy. They know that their minds have a tendency to wander or that they're generally optimistic or pessimistic. These are the things that we know about ourselves that others may not.

There are some traits, however, that people can't judge accurately when it comes to themselves, such as intelligence, creativity and attractiveness [source: Washington University in St. Louis]. Most of us would like to be brilliant and good-looking, and it's either too hard for people to admit that they've fallen short of the ideal, or they lack the self-esteem to see that they meet or exceed it. People can't accurately judge whether they possess these traits because the traits are so desirable, and we all have a vested interest in being the best.

Other people, however, have the distance to make objective pronouncements about another person's intelligence or creativity. It's much easier to say that your friend is a beautiful dummy or an average-looking brainiac than to consider whether you are. Such a statement about a friend doesn't threaten your self-esteem or rewrite your perceptions of yourself. And that's what many of us have: perceptions. We have ideas of how we'd like to be -- an extroverted life of the party, a witty flirt, a quiet but thoughtful scholar -- and we try to present that image to the world. Others, however, don't have an investment in that representation, making it easier for them to see someone's true self.

We can know ourselves better by soliciting feedback from those who can see what we can't. Our friends may see that we're intelligent, but too obsessed with proving it at parties to be much fun, or they may see that we constantly fidget at gatherings as we worry about our appearance -- when what we really need to do is calm down and enjoy the night.