Browse the article Did Schizophrenia Evolve Along With Our Brains? 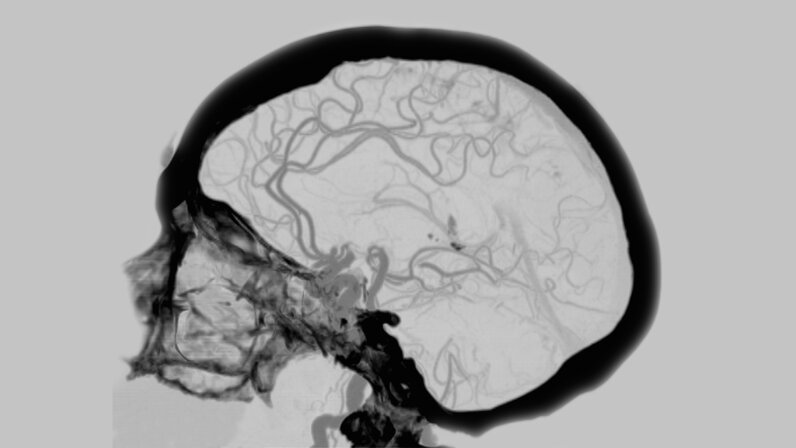 This angiogram CT scan shows the amazing organ that is the human brain. Callista Images/Cultura/Getty Images

Being human isn't all complex tool use and introspection. We also have to live with the side effects of our evolutionary ascent.

For instance, walking upright allowed us to better use our hands, but it also leads to back pain, knee problems and foot aches. Our large brains, combined with our narrow hips, resulted in a more arduous birthing experience and the necessity of such helpless young.

Now, an August 2018 study published in The American Journal of Human Genetics suggests that neuropsychiatric diseases such as schizophrenia and bipolar disorder might be evolutionary byproducts, too. These disorders are heritable and occur in roughly 3 percent of the human population, reports the study. They do not occur in nonhuman species.

According to the Stanford University researchers behind the study, changes in genes controlling brain size, connectivity and function may have made the human mind as we know it today possible, while also opening the door for neural disorders. Of particular note is the CACNA1C gene, which belongs to a family of genes responsible for making calcium channels that support cells in multiple ways. On this gene, highly repeated sequences of DNA displayed abilities to activate gene expression and were tightly linked to genetic markers for bipolar and schizophrenia susceptibility.

As such, the researchers hypothesize that the expanded genetic sequence in the CACNA1C gene may have given us an evolutionary advantage, while also opening the door to human-specific neuropsychiatric diseases. As ever, more work is required, but the results also could aid in the diagnosis and genotype-targeted treatment of schizophrenia and bipolar disorder.

Now That's Interesting
Has schizophrenia always existed in human beings? The word "schizophrenia" itself is barely more than a century old, coined in 1909. Yet inventories of Greek and Roman writings on mental disturbances, for instance, turn up nothing. This conundrum has led some writers to wonder if the condition might be a recent phenomenon linked to the spread of civilization. Others, however, point to descriptions in ancient Egyptian, Vedic and Chinese texts that may well describe the disease's symptoms.