Browse the article What does a society run by women look like? 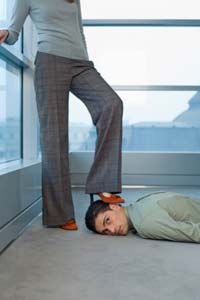 Does a matriarchal society have to look like this? Perhaps not ...
Creatas Images/Creatas/Thinkstock

Think about the fauna that inhabited North America during the Ice Age. The oversized animals must have looked powerful to the primitive peoples roaming the land at the time. Massive woolly mammoths, saber-toothed cats, ancient bison, dire wolves and wily American lions would have been scary stuff up close and personal. Still, prehistoric people clearly recognized the value in hunting these large, dangerous animals as important for the survival of a tribe. Naturally, a tribe would send its strongest, fastest members to undertake the task of hunting down the quarry, and that typically meant sending the men.

When the men came back to camp dragging a giant carcass behind them, it must have been kind of hard for the women to argue with any directions over how to prepare dinner. In a situation like that, you know if you follow orders, you'll be warm and well-fed in short order. This is likely how patriarchies became the dominantly established social order in all but a few cultures.

Now, however, it appears things are changing. Because if you're looking for a society run by women, you could be looking at one all around you -- or at least the rapid evolution toward one. The potential evidence is everywhere, but before we go into any examples, let's take a step back and cover a few fundamental points in the debate. There are different ways the term matriarchy is defined, and it can get a little confusing. For example, some people consider matriarchies to mean women are the dominate gender in a society. They make the decisions, they drive the economy and they rule the politics -- basically the flipside of patriarchies.

But others expect matriarchies to manifest more as egalitarian societies. That means everyone stands on equal footing and works in partnership with one another. Experts who endorse this interpretation believe it's unfair to assume a matriarchy would look anything like a patriarchy in practice, for the very reasons a distinction can be made in the first place.

Those two different interpretations give us some interesting launch points that we'll cover on the next page.

Let's start with the latter definition from the last page. Rather than imagining a matriarchy as a culture where women pin down men by the points of their stiletto heels, picture it as a cultural model where women simply occupy a central role in the society. Everyone is on even ground and decisions are reached by consensus.

One excellent example of this is the Minangkabau people of West Sumatra. Around 4 million in number, the Minangkabau are an ethnic group that consider themselves a matriarchy, and this, combined with a philosophy called adat that emphasizes nurturing both people and nature, forms a core tenet of their society [source: Sanday].

How does this work? Women own the land, and it's passed down matrilineally from mother to daughter. Rather than women moving in with their husbands upon marriage, the men join their new brides' households. Women are considered central to the community, and older women even more so -- they're regarded as the strongest pillars in the society. The men aren't oppressed; they're simply peripheral in familial organization. All the members of a family work for the betterment of everyone else.

But what about a society where females truly do dominate males? According to some, in many parts of the world that's exactly what's happening, even in the United States. The theory goes like this: As we've transitioned into a postmodern society, women seem more adaptable or more naturally suited for the changes and challenges that evolution involves. Perhaps success is due in part to talents such as social smarts and communication skills which are now more often valued in the workplace than the physical strength and stamina that originally propelled men to the top.

Women today hold more managerial and professional jobs than they ever have (50 percent up from 25 percent in 1980). About three quarters of the approximately 8 million jobs lost in the latest recession were lost by men in blue-collar industries such as construction and manufacturing, and white-collar industries like finance. When it comes to growing sectors of the economy, men are leading in only 2 of the top 15 categories -- janitorial and engineering [source: Rosin]. In terms of education, women are getting degrees three to two over men. In terms of money, women control more than half the wealth in the United States, and in terms of purchasing power, their control is even greater. Women generally manage some 80 to 90 percent of their families' buying power [sources: PBS, Pittsburg Post-Gazette].

Whether these statistics are signs of a domineering or egalitarian matriarchy is not yet completely clear. But it does appear that a strong social shift has been occurring and still is. Although a wage gap remains between the genders, women workers are slowly but steadily closing that divide. In the past few decades, women have taken the workplace by storm; they still largely rule the home; and they comprise a huge portion of the consumers pushing the demand side of the market as well. Even if that's not technically a matriarchy, it certainly doesn't sound like much of a patriarchy either.