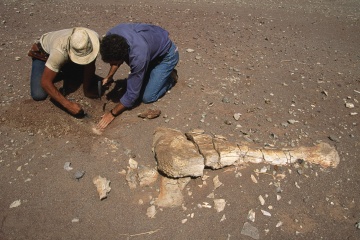 Although significant, the mass extinction that killed off the dinosaurs is not the biggest one in history. Here, paleontologists dig up the remnants of a distant past.
© Didier Dutheil/Sygma/Corbis

Extinctions happen all the time. In fact, more than 90 percent of all life forms that have lived on Earth have gone extinct. One organism dies out and another evolves to take its place. But during five periods in the last 500 million years, extinctions happened rapidly — at least in geological time — killing off 50 to 90 percent of life forms in existence [source: National Geographic].

The most famous mass extinction occurred about 65 million years ago when the dinosaurs were killed off. Called the Cretaceous extinction, this event is thought to have occurred after an enormous asteroid hit the Earth. Dinosaurs weren't the only victims of this event; nearly 50 percent of all life forms were also destroyed.

As bad as that sounds, it's not the worst extinction in Earth's history. Centuries before dinosaurs were even in a twinkle in our planet's eye — about 250 million years ago — the Permian-Triassic extinction wiped out nearly 90 percent of life. Scientists have a variety of theories as to the cause. Some believe a huge comet or asteroid struck the Earth, similar to the dinosaur extinction. More recently, scientists have suggested massive volcanic activity in present-day Siberia as the cause. The carbon dioxide and methane emitted by volcanoes may have made the oceans more acidic and warmed the Earth, causing the extinction [source: Arnold].

In 2014, scientists at the Massachusetts Institute of Technology took the volcano idea one step further and posited that a methane-producing organism, Methanosarcina, flourished thanks to the nickel that the volcanoes emitted. Methanosarcina need nickel to survive. As the nickel entered the water supply and flowed around the world, Methanosarcina also spread, emitting more and more methane (insert 12-year-old-boy humor here). The oxygen supply was depleted, species perished and their decomposing bodies provided another food source for Methanosarcina, which emitted more methane [source: Arnold].

Not all scientists are convinced that one single-cell organism had the wherewithal to take down 90 percent of the life forms on Earth. Maybe an asteroid, volcanoes and methane-producing organisms combined forces? Scientists continue to look at this event to solve what could be considered an intellectual conundrum and to ponder whether we can keep an extinction of this scale from happening again.

Scientists Call for a Global Germ Bank
Could we clone our organs to be used in a transplant?
The Fungi Amongi Are the Great Decomposers