Penning "On the Origin of Species" 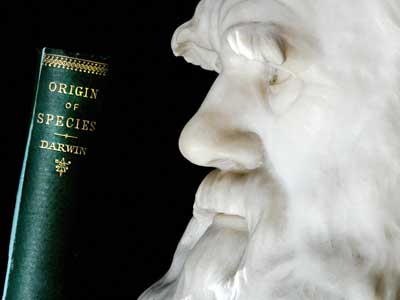 A bust of Charles Darwin immortalizes his features, just as his book "On the Origin of Species" immortalizes Darwin's name.
Shaun Curry/AFP/Getty Images

Charles Darwin was a celebrity when he returned to England from his five years aboard the HMS Beagle. As such, he also was free from the religious life his father had intended for him. Instead of serving the Church of England, he studied his collected specimens. After all, he suddenly found himself brushing shoulders with members of Europe's scientific elite -- individuals whose respect he intended to earn.

­Fossils and bird specimens especially interes­ted Darwin. In the fossils, he saw forms of extinct life similar to those thriving in the present. Birds, such as those brought back from the Galápagos Islands, provided a curious puzzle: What he first took for different species were actually numerous varieties of the finch family. Details such as these suggested that past species had adapted and competed with each other for survival. The winners become today's life forms and the losers became extinct -- and the competition continued in the present.

It's important to note that scientists in Victorian England lived drastically different lives from those of their modern counterparts. For instance, Darwin never held a paying job his entire life. As an English gentleman, he followed the acceptable path in life: living on inherited money in a large country home. Plus, he managed to essentially double-dip into his grandfather's china fortune by marrying his first cousin Emma. With these finances in place, he was able to pursue his scientific passions with gentlemanly dignity, first in London and then at Down House, the Darwin's' family home for the next 40 years.

Darwin toiled with various studies and experiments for two decades following his return, generating findings to back up his theories, all the while drafting a three-volume work tentatively titled "Natural Selection." The work was a departure from the predominant theories of the day in that it was a nonreligious biology. Up until Darwin's time, even naturalists believed God had independently created each species. Darwin's theories not only presented a world where natural selection drove the steady modification of species, but also suggested that humans shared common ancestry with the rest of the animal kingdom. This idea alone was profound: It meant that humans were not the God-ordained masters of the Earth, raised up from the dust on the sixth day of creation. Humans were merely animals that had evolved to their current state.

The radical nature of this idea was not lost on Darwin. Other scientists published similar evolutionary theories, only to endure public ridicule at the hands of the press. He set out to avoid this fate by painstakingly assembling as much evidence for his theories as possible. He knew that both the church and the public would react angrily, and was racked by fear and anxiety over their inevitable outrage. In his writings, Darwin compared sharing his writings with friends to "confessing to a murder" [source: American Museum of Natural History].

Delayed by personal illness and the deaths of two children, Darwin was finally spurred on to publish his theories when he received a letter from fellow Englishman Alfred Russel Wallace. A specimen collector working in the Malay Archipelago, Wallace had developed a very similar theory. Despite his apprehensions, Darwin didn't want to see recognition and nearly 30 years of research slip through his fingers. At the urging of friends and colleagues, excerpts from both Darwin's and Wallace's works were presented at the Linnean Society on July 1, 1858.

The following year finally saw the publication of Darwin's theories under the title "On the Origin of Species by Means of Natural Selection, or the Preservation of Favored Races in the Struggle for Life."