Is the DNA between genes really junk?

Labeling any part of our genetic makeup "junk" was tempting fate. After all, wouldn't any sane person look at the incredible complexity of human DNA and muse, "Eh, it's probably there for a reason?" But for a long time, scientists just didn't know what lay between our genes in the jungle of DNA. So "junk" it was. But let's back up and remind ourselves what all that genetic material is in the first place.

Deoxyribonucleic acid is the physical substance that contains our genes. (Each chromosome is one long string of DNA.) A typical protein-coding gene has sequences of DNA that control when the gene is expressed, along with a coding sequence that's copied (or "transcribed") to make ribonucleic acid. The RNA copy is then "translated" into a protein.

This was pretty confusing for the scientists who first started studying the genome (aka an organism's complete package of genetic material) in the '70s. If the vast majority of our DNA isn't coding for any protein, then what the heck is it doing there? Because they couldn't answer the question, the pioneers gave that noncoding DNA the unfortunate title of "junk." And thus, "junk DNA" lives on in the lexicon instead of a more sensitive title like, "moving-to-the-beat-of-a-different-drummer DNA" or "dancing like no one's watching DNA."

Up until the first "draft" of the Human Genome Project in 2000, scientists still were pretty certain that junk DNA didn't serve an essential function. But in 2012, a group of geneticists published multiple findings that finally began showing that one person's junk is another person's treasure. Well, more like one person's junk is the same person's treasure, since the DNA previously thought to be fluff in the way of the good stuff turned out to be the very thing that told the good stuff how to be good.

Confused? Climb your double helix ladder to the next page where we'll explain more in-depth. 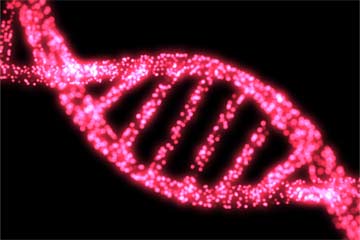 A lot more of that double helix is getting respect these days.
Wavebreak Media/Thinkstock

So as we said, we have loads and loads of DNA, only some of which is protein-coding genes. For a long time, scientists thought that anything noncoding was -- it's almost rude to say it -- "junk," and labeled as such.

But now so-called junk DNA is having its day, courtesy of the Encyclopedia of DNA Elements, or ENCODE, project. Thanks to ENCODE, a group of more than 400 geneticists from around the world have been scrutinizing this DNA. Although the DNA doesn't include instructions for proteins, it wasn't just hanging around. In fact, it seems this noncoding DNA (a much kinder label) actually contained gene switches that control our genes.

To take our switch analogy further, let's think about a radio. Without some sort of switch mechanism, it wouldn't serve much good. But with an on/off mechanism -- not to mention a tuner and a volume dial -- we can make that radio work. Same with genes. A gene has to be told what to do; on its own it's just blinking 12:00, like that radio in your house. But with the switches that exist in our noncoding DNA, the genes can become activated. The gene switches determine what genes are used (and how) in a cell. Much as our radio tuner tells us if we're going to listen to pop music or NPR, our gene switches tell our genes what they're to become -- and, like turning the volume up or down, the switches determine how much protein is made and when. So our former junk DNA actually contains crucial instructions for how our genes operate within each cell.

Even more interesting is the implication that genetic switches are playing a large role in disease. Some diseases -- certain cancers, for instance -- are thought to come from changes in DNA. But ENCODE showed a link between malfunctioning genes and variants in the switches -- not a variant in the gene itself. In other words, it might not be the radio that's defective; the volume might just be broken. Which, I think we can all agree, is pretty much the coolest thing we've learned today.

Author's Note: Is the DNA between genes really junk?

It only took me one neurobiologist to relearn everything I forgot about DNA after my freshman year of high school. But it turns out that I'm not the only one who's still figuring out DNA: Researchers recently found that it was that former ne'er-do-well junk DNA (and not any particular gene itself) that contained mutations that might lead to the development of melanomas.