Are foods made using biotechnology safe to eat? 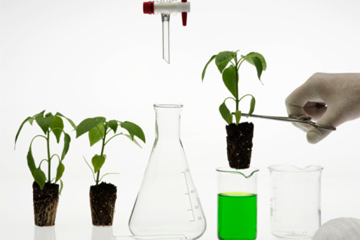 Genetically modified foods may produce higher yields and be resistant to pests, but some wonder if the changes make the crops unsafe to consume.
©iStockphoto/Thinkstock

Agricultural biotechnology is the science of using genes to alter crops. Why would scientists want to fiddle with a plant's genes? The reasons range from improving crop yields to designing plants that are resistant to pests and disease. But are these genetically modified foods safe to eat?

The short answer is yes. Scientists around the world have conducted multiple studies on genetically modified food and found that the food is just as safe -- or perhaps even safer -- than food grown with more conventional processes. There are many reasons for this.

The first is that while scientists have been modifying plant genes for years, they usually focus on a few specific genes in order to get a particular result. Plants have tens of thousands of genes. The genetically modified product won't be dramatically different from its natural counterpart. It may have a few features that the natural version doesn't have but otherwise will remain identical.

Some people worry that genetic modification, which introduces genes from one species into an entirely different species, could create new allergens. In fact, it may turn out that the reverse is true. Depending on the food, scientists might be able to remove or inhibit the proteins that act as allergens for some people. This isn't true for every food -- in some cases the protein may be a vital component of the food in question. But genetic modification may make some hypoallergenic foods possible.

Another concern is that some of the genetic markers scientists use could lead to developing bacteria with a built-in resistance to antibiotics. Scientists use antibiotic gene markers to link genes for the desired trait -- for example, a higher crop yield -- to resistance to a specific antibody. By exposing a modified plant's cells to antibiotics, a scientist can confirm whether or not the genetic modification was successful.

In the United States, farmers don't have to label genetically modified foods or products. Both the Environmental Protection Agency and the Food and Drug Administration have very strict regulations that products must pass before they can go to market. It can take between seven and 10 years before these governmental agencies approve a genetically modified product for the market [source: Chassy].

It's possible that the foods that come from biotechnology are not only safe to eat, they're actually safer than their natural counterparts. That's because after aggressive testing and analysis, scientists know far more about the genetic composition of modified foods than we do about foods grown in a more traditional fashion. While the controversy around genetically modified food is far from resolved, it appears that you shouldn't worry if the ear of corn you're about to enjoy got its start in a laboratory.

Learn more about biotechnology by following the links on the next page.

Scientists Call for a Global Germ Bank
Could we clone our organs to be used in a transplant?
The Fungi Amongi Are the Great Decomposers