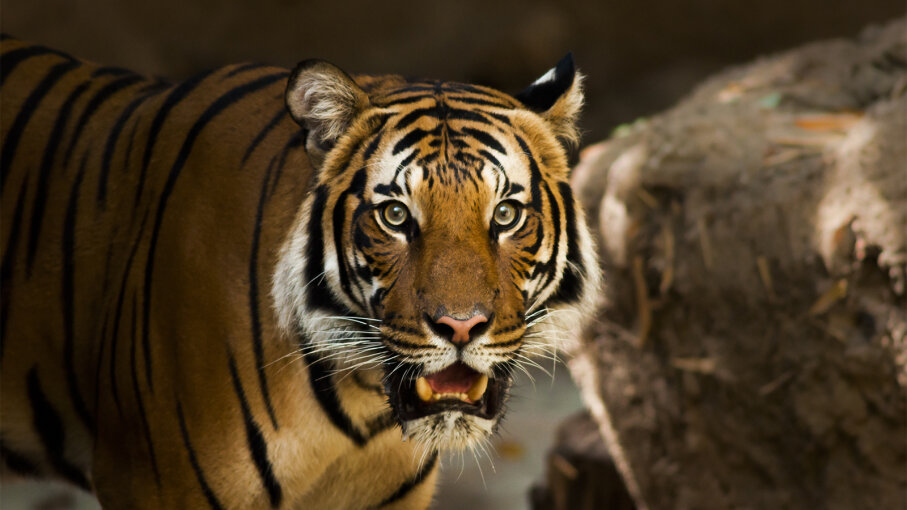 Scientists have begun banking skin cells from Sumatran tigers (Panthera tigris sondaica) and other endangered species, hoping to use assisted reproductive technologies to make male and female gametes, which could then potentially create a live offspring. Jessica Weiller

It might not surprise you to hear wild animals aren't doing well. At this point, humans and the livestock we grow for food account for 96 percent of mammal biomass on Earth. We take up a lot of space with our bodies, livestock and infrastructure, and that's driving wild animals into extinction.

But 21st-century humans are smart, right? Can't we figure out a way to help these animals survive? Or at least save some to their genetic material until such time when we can help make new Sumatran tigers (Panthera tigris sondaica), of which there are only about 400 alive in the wild today.

The concept of creating a repository for the genetic material of endangered species has been around for a while — projects like the Frozen Zoo at the San Diego Zoo and the Frozen Ark in the U.K. have been cryogenically storing genetic material (freezing it in liquid nitrogen at temperatures around -320 °F [-196°C]) from captive mammals, from the Pacific pocket mouse (Perognathus longimembris pacificus) to the clouded leopard (Neofelis nebulosa), since the 1980s. And cloning endangered species has proven possible — in the early 2000s, scientists successfully cloned a couple of them: an African wildcat (Felis silvestris lybica) and an Asian ox called a gaur (Bos gaurus).

"The problem with cloning is it's highly inefficient — the process is tricky, even with animals that are well understood and described, like house cats, dogs, horses and cows," says Franklin West, assistant professor of regenerative medicine in the Regenerative Bioscience Center at the University of Georgia. "So when you start talking about cloning endangered animal species, it gets tough because we just don't have enough information about the animal."

Cloning also requires eggs from the animal you're trying to clone, but obtaining gametes (sperm and egg) from a live animal can be extremely difficult — especially an endangered one. Sperm can be taken from a zoo animal that has recently died, but eggs present the real challenge.

"Most of the time it's too risky to collect eggs because you need to superovulate the animal, and sometimes there's a surgical procedure involved," says West. "With most endangered species, the best you can get is a skin biopsy, but skin is never going to turn into a tiger, so what do you do with that? It's almost of limited value without some sort of functionalization of it."

Which is why West and his colleagues have developed the technology to turn almost any cell in the body — there are some exceptions, but very few — into a pluripotent stem cell, which is a cell that can turn into any other type of cell in the body.

West and his colleagues have had success in turning a skin cell into a stem cell and turning pluripotent stem cells into sperm. West says they could potentially even turn a stem cell into an egg as well, which would get around the problem with cloning — not having an egg source. If they can use this assisted reproductive technology to make male and female gametes, they could use them together to make a live offspring.

The team has begun by banking skin cells from a Sumatran tiger and a clouded leopard at Zoo Atlanta.

"We could have done cows or horses, but we chose cats for a number of reasons," says West. "The fact that we know a lot about domestic housecat reproductive physiology makes it reasonable to do larger cats like clouded leopards. Ultimately, what I'd like to do is use domesticated cats as recipient animals — theoretically, you could transfer a clouded leopard embryo into a housecat."

In addition to creating new animals, this technology might be useful in helping protect vulnerable populations of animals from disease. For instance, the lions in the Serengeti National Park have become vulnerable to canine distemper — a disease related to measles in humans — which is most commonly found in domesticated dogs. This technology could potentially be used to generate distemper-resistant lions. Because it's almost impossible to vaccinate endangered animals en masse, this might be an option to breed resistant animals that could introduce resistance into natural populations.

If you're interested in contributing to this project to turn frozen tiger skin cells into real live tigers, the UGA Regenerative Bioscience Center and Zoo Atlanta are currently collecting donations to help this project move forward. You can donate to their work here.

Learn more about animal extinction in "Flight Ways: Life and Loss at the Edge of Extinction (Critical Perspectives on Animals: Theory, Culture, Science, and Law)" by Thom van Dooren. HowStuffWorks picks related titles based on books we think you'll like. Should you choose to buy one, we'll receive a portion of the sale.