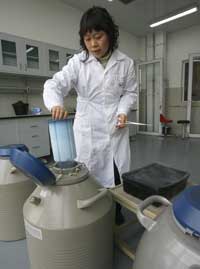 ­Hopefully, we'll never have to find out. Explore the links below to learn more abo­ut the genetic marvels behind life.