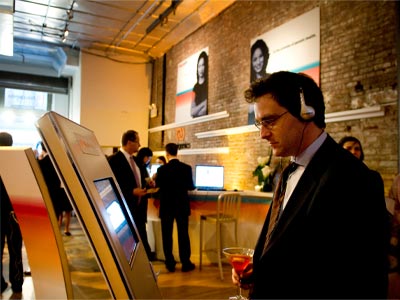 At the Navigenics store in New York City, you can sign up to have your DNA tested for various diseases. It doesn't look like there are any supplementary genes for sale, though.
Shaul Schwarz/­Getty Images

Tweaking a person's genes for sports could, at the outset, be as easy as choosing from a menu. Scientists know of 187 genes linked to human fitness or athleticism [source: Rankinen]. For instance, some genetic variations are linked to running the 2,000-meter particularly well [source: Cam]. "Tweaking" might mean adding copies of one of these nearly 200 genes or amplifying or lessening their activity in the athlete.

­Scientists don't know what many of these "sports" genes do. For safety's sake, an athlete might tweak a gene with a well-understood function. One potential candidate might be the IGF-1 gene for insulinlike growth factor-1, which repairs and bulks up muscles. The gene for erythropoietin (EPO), which boosts red blood cells thereby raising blood oxygen and endurance, presents another possibility. Athletes, particularly cyclists, have been known to dope with synthetic EPO [source: Wells].

Thanks to gene therapy, we have ways to send genes into the body. Scientists can inject vectors, which are just gene transporters in this case, into muscles or blood. They can also remove cells, modify their genes and then return the cells to the body, although athletes might not want the invasive procedure [source: Wells].

Viruses serve as popular vectors for shuttling a gene into a cell. Like little syringes, they naturally inject their genetic material into our cells. To re-engineer them for delivering human genes, scientists "clean out" the harmful parts of the virus, insert a human gene into the virus' genetic material and then inject the virus into the body. Another type of vector is a plasmid, a ring of bacterial DNA into which human genes can be added. When plasmids are injected into muscles and the muscles get an electric shock or ultrasound treatment, muscle cells take up the plasmids.

­Sound easy enough? There's a catch: delivering genes to the right cells. Otherwise, an athlete who wants bigger muscles might end up inadvertently making growth proteins appear in his eyes. Scientists can steer genes by injecting into muscles, so the genes only enter muscle cells. Or they can use a virus that infects only certain body parts. They can also let the genes enter cells liberally but make them activate only in certain cells. It's even possible to engineer a gene to make proteins only when the athlete "tells it to" by taking a drug.

Once a gene is incorporated into a cell, the cell is transduced. Transducing a whole body part, like a muscle, is hard; usually, only some cells cooperate. Inside cells, the gene will either stay in the nucleus, next to the chromosomes, or actually shove into a chromosome. As part of a chromosome, the gene can cause lasting change: It's passed on to new bodily cells when the transduced cell divides. Genes that don't shove into chromosomes will die when the cell dies. Once transduced, cells will follow the new genetic instructions and make the desired proteins. The athlete, of course, hopes that the proteins will change the way his or her body works in a way that boosts performance.

­Is our genetically modified athlete ready to run farther, jump higher, lift more weight or head for the hospital? Read on to find out.

Neither HowStuffWorks nor the writer advocates gene doping, but we are committed to explaining it to you. Just don't go trying this stuff at home, OK?