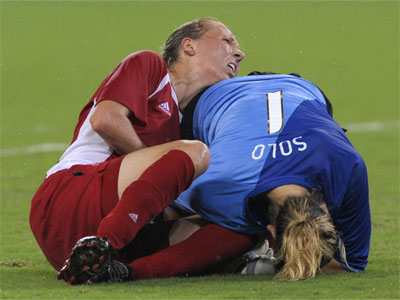 Athletes like Brittany Timko of the Canadian women's soccer team get hurt enough on the field without having to worry about whether gene doping will send them to the hospital, too.
Liu Jin/AFP/Getty Images

It's hard to say what would happen to an athlete who tried gene doping. In the world of human experiments, scientists have only transferred genes to make sick people healthy, not healthy people better.

Bioethicist Thomas Murray speculated on what would happen if an athlete were to use today's technology in an article for WADA's Play True magazine. He wrote that most athletes would get no boost beyond the placebo effect, many would be harmed and a few, very improbably, might get a temporary boost in performance. But Murray argued it wouldn't be enough to upset the competitive balance in Olympic sports. That's because scientists have trouble carefully controlling the results of gene delivery: They can't deliver a large effect without also delivering a large risk [source: Friedmann].

Consider the EPO gene. A drug called Repoxygen delivers the EPO gene with some controls, so that when blood oxygen dips below normal, the body makes enough red blood cells to restore normal oxygen. The gene then shuts off [source: Binley]. Athletes seeking an edge probably would want better-than-normal blood oxygen. They could try adding the EPO gene with no controls. But in healthy monkeys who received that treatment, blood became so thick with red blood cells that researchers had to bleed the monkeys to prevent heart failure and stroke. Eventually, the monkeys were euthanized [source: Svensson].­

­Other risks exist. Here's a big one: cancer. Cancer can happen if a genetic modification accidentally turns on a cancer gene or turns off a cancer-suppressing gene. An event like this caused leukemia in five children who received gene therapy for severe combined immunodeficiency. Their new ­genes inserted into a bad place on a chromosome and turned on cancer genes [source: Staal].

The athlete also could have an immune reaction. His or her body might attack the virus used to deliver the gene, the viral or bacterial genes themselves or the very protein meant to boost performance. The reaction could be mild, like a fever. But it could also be severe. Healthy monkeys died from severe immune reactions after "doping" with the EPO gene. The gene was injected into their muscles, which made a different EPO protein than the one naturally made in the liver. Their systems attacked both EPOs, and their bodies stopped making red blood cells [source: Gao].

The action of the genes can cause problems, too. For example, the genes for human growth hormone and IGF-1 tell cells to divide. If they get into the wrong cells, cells can divide uncontrollably and form tumors [source: Wells].

Even riskier, gene doping may permanently affect athletes. Doctors can't pry a gene out of a cell, and surgeons can't necessarily cut out transformed cells. They can try to treat unwanted effects, but rescue efforts have failed in gene therapy patients [source: Raper]. In addition, gene doping's long-term effects pose another mystery. What happens to athletes who try gene doping at age 20 when they get old? Scientists don't know. No one has followed gene therapy patients that long.

­So today, gene doping isn't safe. The athlete might experience nothing, or he or she could experience a fever or even a medical emergency. Would athletes who tried gene doping also get in trouble? Find out next.

Word on the Street

Percent of athletes at two Oregon universities who: