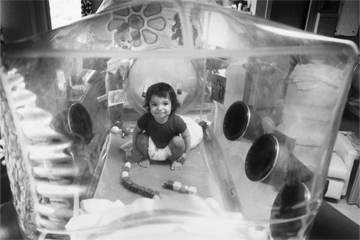 Severe combined immunodeficiency (SCID) syndrome is one of the (limited) success stories of gene therapy. Pictured here is "bubble boy" David Vetter, who had SCID and died years before the trials began.
© Bettmann/Corbis

The idea of gene therapy has been bouncing around scientists' brains for decades. In fact, it was Edward Tatum, an American geneticist, who first suggested that genetic diseases might be cured with "genetic engineering" in 1966. That same year, another American, Joshua Lederberg, actually outlined the details of "virogenic therapy" in an article published in The American Naturalist. Numerous researchers then worked diligently to move gene therapy from concept to reality. In 1972, biochemist Paul Berg figured out how to snip out a section of human DNA and insert it into the genome of a virus, which he then used to infect bacteria cells. Eventually, he was able to get bacteria to produce human insulin. Ten years later, Ronald M. Evans inserted the gene for rat growth hormone into a retrovirus and then transferred that gene into mouse cells.

All of these efforts set the stage for a gene-therapy revolution. The first gene therapy trial approved by the U.S. Food and Drug Administration took place in 1990. The trial focused on patients with severe combined immunodeficiency (SCID), also known as "bubble boy" disease after David Vetter, who lived in the sterile environment of a plastic bubble until he died in 1984 at age 12.

Researchers in this trial used what is known as an out-of-body gene therapy. First, they harvested marrow from a patient by inserting a special needle through the skin and into the hip bone. Then, in the laboratory, they exposed the stem cells from the marrow to retroviruses whose RNA had been modified to contain the gene associated with SCID. The retroviruses infected the stem cells and inserted the functional gene into the host chromosome. Next, scientists took the engineered stem cells and injected them back into the patient's bloodstream. The cells made a beeline for the bone marrow and, like all good stem cells, matured into different cell types, including healthy T cells with functioning copies of the necessary gene. Using this technique, dozens of children with SCID have been completely cured. But it's not the only disease -- or approach -- on the playlist of geneticists [source: Nienhuis].