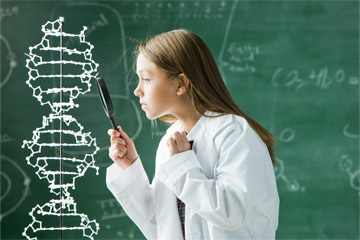 No other species on the planet can match humans' capacity for learning, problem solving and communication, which begs the question; how did we get to be so smart? A study by the University of Chicago offered new clues about the evolution of the human brain, identifying two genetic variations, both of which evolved within the past 60,000 years, that appear to increase brain size and cognitive ability [source: Wade]. The study is just some of the latest evidence that the human brain, the most complex structure in the known universe, is only getting more capable as time goes on. But some scientists worry that genetic enhancement, a form of genetic engineering that may one day allow parents to choose specific traits for their children, could ironically impede human evolution. To understand their concerns, let's start by learning more about how genetic enhancement works.

Simply put, genetic enhancement is the process of modifying an organism's genetic makeup to produce desirable traits. Geneticists insert new, beneficial genetic information to either support or entirely replace the genetic information already in place, leaving the recipient not just well but better than well. Scientists have already used the process to create so-called "Schwarzenegger mice," which underwent rapid muscle development following the procedure, and while applying the technology to humans is a much more complicated endeavor, the possibility becomes closer to reality with every new discovery. Eventually, parents may be able to pick their child's eye color, hair color, skin tone and even their child's temperament. They may even be able to choose how intelligent their child is, which makes it all the more difficult to imagine that, over time, genetic enhancement could actually impede the brain's ability to evolve.

The reason for this goes back to the fundamental principles of evolution. Natural selection works most effectively when a species has a large gene pool. In reaction to a changing environment, beneficial genetic variations become more prevalent in a given species. Because we don't know what lies ahead, it's very difficult for us to know which genetic variations may one day prove advantageous. One potential problem with genetic enhancement is that, in an effort to promote only "good" genetic traits, we may actually be suppressing other genetic traits that could prove advantageous down the road, effectively shrinking the human gene pool. By extension, genetic enhancement could even suppress the brain's ability to evolve.

For instance, doctors may one day screen embryos to ensure they are healthy. The process, known as prenatal screening, is already used to determine whether an embryo exhibits signs of conditions like Down syndrome and diseases like sickle cell anemia, but it could also be used to identify any other genetic abnormalities -- particularly genetic mutations -- exhibited by an embryo. But while most mutations are indeed harmful, some ultimately prove beneficial. And it's those beneficial mutations that are one of the driving forces behind a species' ability to evolve. Accordingly, if widespread use of genetic enhancement is used to suppress genetic mutations, it could be impeding human evolution in the process. For instance, imagine if the genetic variants mentioned earlier, responsible for encouraging the development of larger brains, were identified by geneticists as potentially harmful mutations and promptly eliminated from the gene pool. We would have missed out on a very significant event in human evolution.

But don't start worrying just yet that genetic enhancement will prove to be the downfall of the human race. For one thing, the technology behind genetic enhancement is still far from ready for use on humans. We're extraordinarily complex organisms, and many of our genetic traits are controlled by multiple genes. Until geneticists completely understand the ramifications of manipulating our genetic material, they simply won't risk practicing genetic enhancement without controlling for every possible side effect. What's more, ethical questions abound regarding genetic enhancement. One strong objection stems from the fact that the procedure is certain to be an expensive one, ensuring that only the wealthy can afford "designer babies." Over time, society could even split into the genetically enhanced "haves" and the unenhanced "have-nots," leading to discrimination and social discord. Clearly, genetic enhancement has a number of barriers it must overcome before it can have any impact, good or bad, on the development of the human race.

How accurate is our mental image of ourselves?
Your First Memory Is Probably Fiction
Clever App Uses Smartphone Camera to Identify Plant Species