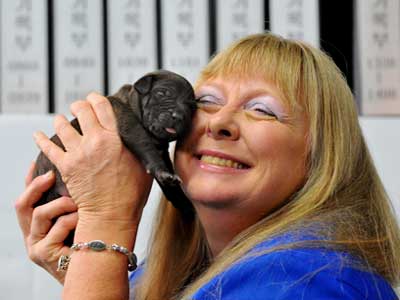 Before we get into why dogs have proven to be one of the hardest mammals to clone so far, let's go over the basics of reproductive cloning. The most common type of reproductive cloning is called somatic cell nuclear transfer (SCNT). Let's say we plan to clone a male golden retriever named Archie. With SCNT, you begin by extracting an egg from a female golden retriever. You remove the nucleus from that egg, which contains the DNA. Then, you take a cell from Archie and remove that cell's nucleus as well. You inject the nucleus from Archie's cell into the donor egg. Next, apply electricity to the nucleus and egg to fuse the two together, mimicking the union of sperm and egg in natural reproduction. The electricity also stimulates cell division, forming an embryo. Finally, you implant that embryo into a female dog's uterus, thus impregnating her. When the surrogate dog gives birth, you have an adorable puppy clone of Archie.

But creating an Archie clone isn't as simple as it sounds. First, getting the egg from a female dog can be troublesome because dogs don't experience regular ovulation cycles like humans. Although hormones can jumpstart ovulation in humans, canines don't respond to such treatments [source: Gorner]. Not only must scientists wait for dogs to go into heat, the eggs stay mature for just a few hours, leaving a brief window of opportunity for extraction [source: Kiem]. If scientists do manage to extract an egg, a coating of fat makes it difficult to remove the nucleus. Consequently, since 2005, only around 40 dogs have been cloned [source: Kiem].

Although primates go through more regular ovulation cycles compared to canines, monkey cloning has remained a difficult feat for at least four years. After performing SCNT, the embryos still wouldn't properly develop. Then, in 2003, a group of scientists at the University of Pittsburgh School of Medicine made an important discovery while studying the cloned embryos of rhesus monkeys. They realized that during SCNT, monkey cells lose two key proteins involved in cell and chromosomal division [source: Graham].

A few years later in 2007, a team of American scientists realized that the dye and ultraviolet light, sometimes applied to the rhesus monkey egg during nucleus extraction, can harm it. By instead applying polarized light (light waves that vibrate on one plane) in a process the researchers coined Oosight, the eggs stayed healthy, allowing the scientists to finally clone the rhesus monkey embryos [source: BBC]. However, none of the cloned embryos they implanted in female monkeys survived to birth.

With the U.S. Food and Drug Administration's (FDA) recent safety approval of meat and milk from cloned cows, goats and pigs, livestock clones could be big business in the near future. But what about chickens? A handful of biotechnology companies have jumped on cloned chicken research, but haven't been able to make it happen. Because chickens lay their eggs externally, SCNT doesn't work. Once a hen lays an egg, the nutrients necessary for development are already inside the shell. Even the tiniest incision to extract and replace the nucleus for SCNT would prohibit the embryo from developing into a chick.

­The time and expense researchers pour into every successful cloning story highlights the delicate nature of the science. Combine that with each species' unique reproductive system, and it makes sense that the list of cloned animals isn't too long. Overall, when it comes to baby making, it looks like nature has a leg up on technology.