Why are British scientists creating a human-pig hybrid? 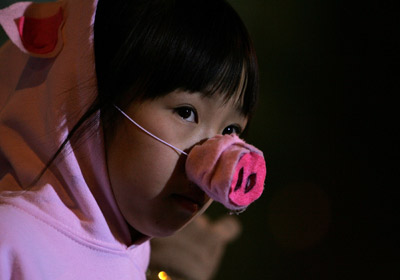 While we won't see any human-pig hybrids roaming the streets, this little girl in San Francisco doesn't mind dressing up as one to celebrate the Chinese New Year.
Justin Sullivan/Getty Images

Most of us are familiar with how a clone comes to be. Scientists take an egg from, say, a sheep, and remove the nucleus that contains most of the genetic material. What's left is basically an egg waiting to be filled with new genetic instructions -- a new yolk, if you will. They then remove the nucleus from another sheep egg and insert it into the first one. That new egg gets implanted into a surrogate sheep that carries and delivers a clone of the animal whose nucleus filled the egg.

Creating a chimera is mostly the same. The only big difference is the source of the transplanted nucleus. In the case of a human-pig hybrid, the egg comes from a pig, and the nucleus comes from a human.

It might seem like this process would produce an embryo that's half human and half pig. In fact, the embryo is almost all human -- scientists estimate that just 0.1 percent of the resulting animal's genetic material is pig DNA [source: Telegraph]. That's because the genetic instructions left behind in the egg, the mitochondrial DNA, number just 37. The mitochondria are the cell's power supply. The nucleus, on the other hands, contains 29,000 genetic instructions [source: Telegraph]. Since the nucleus comes from a human, the resulting embryo is almost entirely human.

Why not stick with human embryos, then? Because that type of research is extremely expensive, ethically problematic and in some places barely legal. Plus, neither these embryos nor their stem cells will ever be implanted in humans. They're for research only.

The pig-human-hybrid study has many goals, but the overarching theme is to research human disease processes for the purpose of finding cures. The idea is to implant the nucleus of an egg from a human being with a disease -- familial heart disease, specifically. By watching how the DNA from a person with a life-threatening genetic condition instructs cellular development in its earliest stages, scientists hope to learn more about the inner workings of heart disease to facilitate better treatments and possibly even cures.

A related goal of the research is to get a better understanding about the interaction between mitochondrial DNA and nuclear DNA. With each coming from a different species, issues affecting interdevelopment become more obvious. With an understanding of how cellular structures affect one another's growth, pharmaceutical cures for genetic defects, along with lab-grown stem cells that can reverse spinal injuries, heart disease, Alzheimer's and Parkinson's, get closer to reality.

That's the idea, anyway. This type of research is in its early stages, and it remains to be seen whether DNA from two different animals can work together effectively enough to provide real scientific benefit. That's one argument against funding such studies -- it's not easy to get DNA from different animals to communicate, and some researchers think it's more cost-effective to stick with all-human embryos. The other objection is based on ethics. Many people believe that combining humans with pigs degrades human dignity. The response from scientists in favor of this research is a simple one: Researchers have an ethical duty to find cures for human diseases and thereby save human lives.

Whether the pig-human hybrid embryos are viable and produce helpful results remains to be seen. What's sure, however, is that we won't be seeing hoofed humans all over the Internet -- at least not anytime soon. The license for the new research in Britain requires the embryo be destroyed after just two weeks, before it has a chance to develop.

For more information on hybrids, cloning and related topics, hoof it over to the links below.