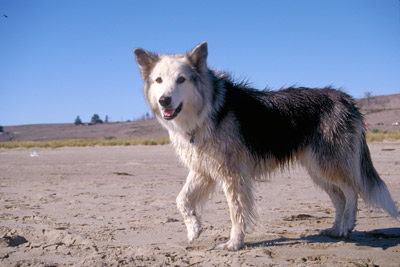 Missy was so beloved in life, she became the subject of a posthumous cloning effort. See more cloning pictures.
BioArts International

­Some people think their dogs are totally worth constant feeding, walking and Frisbee throwing. Others believe their dogs are worth organic kibble and a permanent place on the bed. To Texas billionaire Joh­n Sperling, a dog named Missy was worth cloning.

­Starting in 1998, before Missy was even sick, Sperling gave $3.7 million to Texas A&M scientists to fund canine-cloning research [source: MSNBC]. The goal was to clone Missy, described by all involved as an "exceptional" dog. At the very least,­ she was exceptionally loved.

­And so began the research that would become the Missyplicity Project. Some of those Texas A&M scientists formed a commercial venture called Genetic Savings & Clone. Hundreds of pet owners sent in their pets' skin biopsies for storage (for a one-time fee of about $1,000 and a yearly $100 maintenance charge), hoping their beloved pets would eventually come back to them in clone form. The company reports they delivered two cloned cats, but it was taking too long and costing too much money to clone a dog, so it closed in 2006. The business of dog cloning was then transferred to BioArts, a company already established in the areas of livestock cloning and general tissue storage and transport. BioArts created a special pet-cloning division happily called Best Friends Again.

­Ten years after the Missyplicity Project began, Sperling was still pumping in money. Considering that mice, cattle, horses, pigs, rabbits, cats and, of course, a sheep had already been cloned successfully, it wouldn't seem like such a tall order to clone a dog. And in fact, it had already been done once by researchers at Seoul National University in South Korea. That dog, named Snuppy, was born in 2005. But one success didn't pave the way for a quick victory in the Missy quest. Dogs might just be the hardest mammal to clone -- even harder than humans.

In this article, we'll find out why it's so hard to clone a dog, whether a dog clone can even be identical to the original, and whet­her the Missyplicity researchers have succeeded in creating mini Missy's.

­First, some background on the insanely complex process of cloning a canine. A dog may be delightfully simple in its needs, but its reproductive system is anything but.

(Not Such A) Copy Cat

The first cloned house pet, a calico cat nicknamed Carbon Copy, entered the world in December 2001. She didn't quite turn out as expected. It's not just that the clone wasn't identical to the original -- it looked completely different. The discrepancy in appearance was credited to a special process in calicos that causes many physical characteristics to be determined outside of the DNA structure.