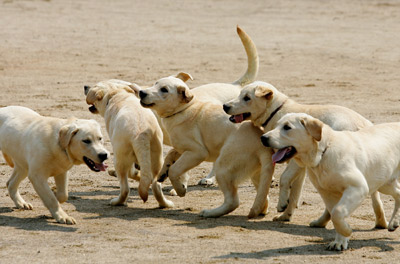 Cloned puppies play at a training center for the Korean Customs Service. The seven dogs, known as Toppy, will work as sniffers.
Chung Sung-Jun/Getty Images

Cloning is more common these days than many of us realize. Companies like BioArts do big business cloning cows that have the specific features both ranchers and food consumers want. Horses with exceptional traits are cloned. Sheep have been cloned to re-create animals that grow more wool. The process goes something like this:

In its simplest form, those four steps make up the cloning process. It may take a lot of tries to produce a healthy livestock clone (about 90, on average), but it happens regularly enough that companies like BioArts are doing just fine [source: Science News]. The problem is, the specific characteristics of a canine's reproductive system make every one of those steps extraordinarily difficult.

First, there's the very s­imple problem of lack of knowledge. There has never been any reason for scientists to seek a deep understanding of canine reproduction. So the first issue the Missyplicity scientists had to overcome was a general shortage of research on the subject.

The other problems were far trickier to deal with. First, most animals ovulate on a regular schedule. Human females, for instance, ovulate (release an egg from the ovaries) approximately every 28 days, for about a week. Dogs, on the other hand, ovulate almost at random. It might be every six months, it might be every 18 months. There's no way to know. So scientists have a heck of a time harvesting an egg from a dog.

To make matters even more complicated, dogs don't release a mature egg the way most mammals do. Their ovaries release an immature egg that then develops in the fallopian tubes. Once mature, that egg is viable for a whole two or three hours [source: BioArts]. Extracting that egg from the fallopian tube at the exact right time is a bit of a challenge.

So let's say once a dog starts ovulating, scientists are lucky enough to get to the egg while it's still viable. The next step, removing the nucleus, is a problem, too. Most animals' eggs are translucent, so it's easy to see exactly what's inside and safely extract the nucleus. Dog eggs are opaque, practically black. This makes going in for the nucleus a lot riskier. It requires special equipment to see inside the egg, and it makes for a lot more failed extractions. It also makes it harder to insert the new DNA.

Finally, inserting the prepared egg into a surrogate is a waiting game, too. A dog can only be implanted with a litter when it's in the randomly occurring ovulation period. It's called estrus -- the time period when a dog can become pregnant. Finding a surrogate is just as hard as finding an egg donor.

So how did the South Korean scientists who created Snuppy overcome these challenges? They credit their success at least in part to their work hours. They worked 20-hour days, seven days a week. When a dog in the lab went into estrus, there was someone there to take advantage of it. It only took them three years to produce a viable clone.

Has BioArts had similar success? Are there any little Missy clones running around? Find out on the next page.