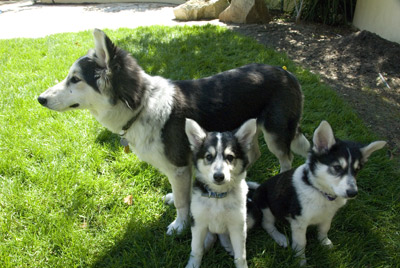 It took nearly 11 years and more than $20 million from Sperling, but Missy has at last been immortalized in the form of three puppies [source: TIME]. Both BioArts and the Sperlings say it's not about replication, necessarily. It's also a fascinating experiment in nature vs. nurture. Will Missy's clones act exactly like her, or will the resemblance only be DNA-deep? And more important, will the clones be as healthy as nongenetically-engineered dogs?

According to BioArts, the dogs are perfectly healthy. They have none of the problems that have sometimes plagued clones, like heart and lung issues [source: TIME]. Some say it's too early to tell, though, whether Missy's clones will develop health problems.

A much more happy investigation involves looking for similarities between the clones and the originals. Watching healthy puppies for hours on end isn't exactly a tedious experiment.

Pictures show that the puppies look a lot like Missy. They have the same fur patterns and texture, at least. They're the same breed mix, probably border collie and German shepherd. And they'll probably grow up to look just like Missy.

Personality, of course, is much harder to quantify. Personality in dogs is loosely defined as behaviors, preferences and traits like stubbornness, intelligence and play styles. Missy's clones act, well, like puppies. BioArts does report, however, that the puppies are, like Missy, both intelligent and willful. And, like Missy, they love broccoli, which BioArts says is a very rare trait in dogs (we're skeptical -- see sidebar).

Still, the question is a fascinating one. Just how much of who we are is determined by our genes? How much is a result of environment? The nature vs. nurture debate is nowhere near an end, Missy's clones' love of broccoli aside. And the uncertainty could produce a financial windfall if scientists can find a way to clone pets more efficiently. Recognizing the potential revenue in pet lovers, an international battle has erupted over pet-cloning rights. The two U.S. companies, BioArts and Start Licensing, share the international patent rights to clone household pets. They're now fighting RNL Bio, a South Korean company, tooth and nail to maintain their exclusive right to clone Fido. As of May 2008, RNL Bio has agreed to cease and desist. But some people believe the company is still trying to clone pets on the black market.

For more information on dog cloning, cat cloning and related topics, including how you can sign up to have your little buddy cloned, romp through the links below.

A very informal HowStuffWorks survey of 13 dog owners regarding their collective 22 dogs revealed that 36 percent like broccoli, 9 percent do not like broccoli, 45 percent have never tried it, and 9 percent will eat it grudgingly. (As one survey respondent put it, "Won't dogs eat anything?")