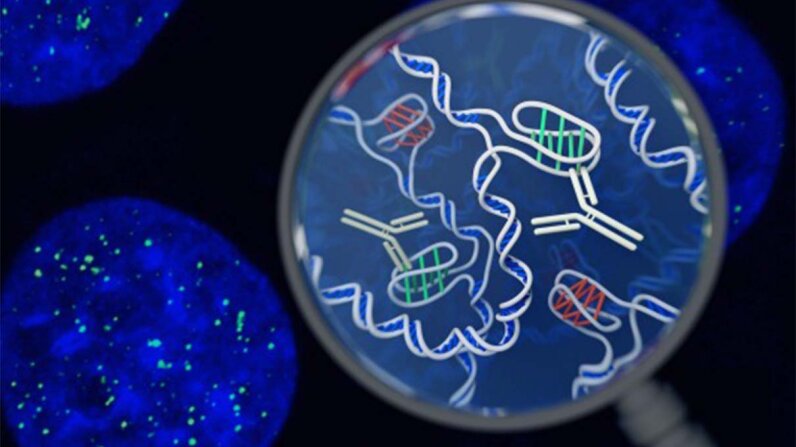 An artist's impression of the i-motif DNA structure inside cells, along with the antibody-based tool used to detect it. Chris Hammang

Some 65 years ago, James D. Watson and Francis H.C. Crick made a revelatory discovery. "We have found the secret of life!" Crick blurted out in a pub, Watson would later claim, after the pair mapped the famous double helix structure of DNA.

Now scientists have found that "secret of life" – DNA – hosts another kind of structure. In addition to the double-stranded spiral, a four-stranded tangle, known as an i-motif, has been shown to exist throughout our genetic material. Its detection within human cells suggests it occurs naturally and may carry a biological role that could be targeted to treat diseases such as cancer.

"People had already shown that you can form these i-motif structures in the test tube using laboratory techniques," says Daniel Christ, head of antibody therapeutics at the Garvan Institute of Medical Research in Australia and co-author of a study about the DNA structures published April 23 in Nature Chemistry. "But what had been outstanding is the validation that these structures actually exist in live human cells. That's what we have now shown and it means that totally different DNA structures exist in our cells."

In the new study, Christ and his Garvan Institute colleagues, Mahdi Zeraati and Marcel Dinger, developed an antibody fragment that specifically seeks out and binds to i-motifs. The antibody was equipped with a biological marker that glows under fluorescent light. This way, the team was able to map where i-motifs were located by identifying fluorescent markers in cells' nuclei.

The method, Christ says, really "moves the bar" in advancing our understanding of i-motifs since knowing where they occur can lend clues to what they may be doing. Human DNA represents a marvel in ingenious packing. If the DNA from one cell were stretched out, it would extend for about six and a half feet (about 2 meters). The necessity of cramming 3 billion base pairs in a space just 6 microns (0.0002 inches) across means the genetic material is arranged and folded in intricate patterns.

An illustration of an i-motif embedded in a strand of DNA.
Mahdi Zeraati

Within this intricate packing, the double-helix structure dominates, but, Christ says his team found that i-motif structures are "pretty common." While they can't yet estimate the actual numbers of i-motifs in DNA, they likely number in the 10,000s within each genome, Dinger says in an email. They're also "dynamic," meaning they can fold and unfold, depending on conditions.

The structures are primarily made up of cytosines, one of the four main bases found in DNA (and RNA), along with adenine, guanine and thymine. Normally cytosines bind with guanines in DNA's double helix structure, but in i-motifs, cytosines bind to each other to form an off-shoot from the double helix.

The quirky structures also appear to favor acidic conditions. These are the kinds of conditions in which i-motifs had previously been detected during laboratory experiments in the 1990s, and the latest research found that the structures' prevalence increases within the human cell when the environment is made more acidic.

So why do the structures exist? Scientists aren't yet sure, but some factors suggest they may play a role in regulating gene production. One reason is that i-motifs occur primarily "upstream" from where genes are made in the DNA structure, according to Randy Wadkins, a professor of chemistry and biochemistry at the University of Mississippi who was not involved in the study.

"We have some 30,000 genes in the human genome but they're not made all the time — it's not a continuous process," Wadkins explains. "These might be mechanisms that operate like a dial at the beginning of gene formation that determine whether you make a little bit or a lot of that gene. The i-motifs are generally located in places where dials like this would be."

Wadkins' lab has been investigating the possible role of i-motifs in cancer. The problem with cancer cells is they reproduce rapidly and their growth is unchecked. If the i-motif structure plays a role in regulating genes that signal a tumor's growth, then it might offer a target for future therapies to halt the spread of cancer.

"If you could find a small molecule that interacts with i-motif alone, then you might be able to regulate the formation of, say, tumor cells," Wadkins says, adding that for now this is just speculation.

The immediate next step will be to confirm the Australian team's findings and then dig into the specifics and functions of these novel DNA structures. As Dinger says, scientists are just at the beginning of understanding all the forms and functions of human DNA.

"We can only interpret about 2 percent of the human genome," says Dinger. "The function of most of it remains a mystery – the discovery of the i-motif adds a new lens through which we can look at the genome and understand how it works."

Now That's Interesting
James Watson, Frances Crick and Maurice Wilkins received a Nobel Prize in 1962 for their work in discovering the double-helix model of DNA. Later accounts detail how Wilkins had shown Watson a critical crystallographic portrait of DNA captured by another DNA researcher (a woman), Rosalind Franklin, just before Watson and Crick finalized their theory on DNA's structure. In 1956, Rosalind Franklin became ill with cancer and died less than two years later. A debate about whether Franklin received due credit for her contribution to the discovery continues.