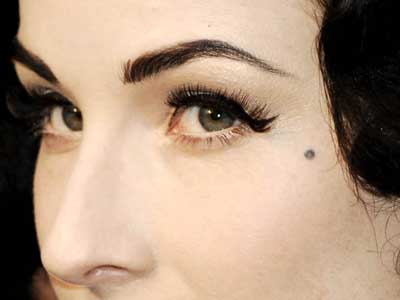 That mole may be more than a mere beauty mark -- it might indicate a long life. A 2007 dermatology study conducted at King's College London indicates that people with more moles often have longer telomeres.
Gianfranco Calcagno/FilmMagic/­Getty Images

­The biblical characters of Adam, Noah and Methuselah all enjoyed life spans of more than 900 years. Rutger Hauer's replicant character in "Blade Runner," Roy Batty, barely made it to his fourth birthday. Today, the modern human enjoys a life expectancy of a little less than 80 years in some parts of the developed world [source: NCHS].

No matter how fundamental your beliefs or fantastical your science fiction fandom, you probably know better than to apply too much hard science to any of those examples. Nevertheless, based on what we know about genetics, we can make a couple of scientific guesses as to why Noah and friends lived so long.

On one hand, Noah might have been born with rather long telomeres, while Batty drew the proverbial shortest straw. In reality, some people are born with longer telomeres than others. Since telomeres shorten with each cell division, it pays to start out ahead. Once you approach the Hayflick limit, the cellular effects of old age begin to set in due to cell death and damage. The situation may even begin to go south beforehand.

Another possibility is that Noah's and Batty's telomeres simply shortened at different rates. Telomeres don't shrink significantly in healthy humans for decades due to an enzyme called telomerase, which partially repairs and lengthens them after each shortening.

Telomerase appears most frequently in stem cells, as well as in cells that divide frequently (such as those that take part in immune functions). Telomerase production goes mostly dormant in most adult cells, but certain factors can increase production. A study conducted by California's Preventive Medicine Research Institute saw telomerase production boosted by 29 percent in 24 patients who switched from a sedentary lifestyle to one defined by exercise, healthy diet and stress management. Was Noah a health nut? Was Batty just stressed out?

­As you might imagine, telomerase has attracted a great deal of interest. If this precious enzyme can stave off telomere shortening, then can't it also allow us to prevent death -- or even reverse the effects of ageing?